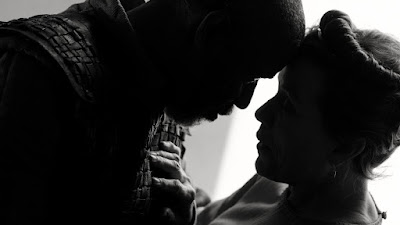 Joel Coen's first non-Coen Brothers directorial film is a triumphantly bold, searing, fast-paced production of Shakespeare's brutal, nihilistic tragedy, MacBeth.
This incredibly cine-literate production features stunning, atmospheric, chiaroscuro black and white photography from Bruno Delbonnel, that gives us hints of Bergman, Welles, Hitchcock and the German expressionists. We are at once in a particular place - medieval Scotland - but also in a slippery dreamworld of stripped back interiors, dream-like landscapes, and sinister shadows. Every scene is deliberately framed, composed, lit and blocked. Silhouette is important. Emergence from shadow is character. Costumes are pared down, graphic shapes and deep textures.
Denzel Washington's MacBeth and Frances McDormand's Lady MacBeth are older than some stage and screen incarnations and this may add to their urgency to bring the three witches' prophesy into fruition. It also makes hollow King Duncan's promise to plant MacBeth and watch him grow as he already looks on the verge of retirement. Washington's hero is a straightforward military man who descends into arrogance and then fatalism in a worthy performance that didn't quite catch alight in the most memorable soliloquy "tomorrow, tomorrow...".  McDormand was far more powerful and memorable as his wife, more nakedly ambitious at first and then unravelled by her guilt. Her final anguished howls will not soon be forgotten. But for me it's Kathryn Hunter's three witches, AND, masterfully, the Old Man, who steal this film with a powerful physical and vocal performance that contorts and transforms.  She is everywhere and everything - man, woman, spirit, crow. In the smaller parts, I thought the RSC's Alex Hassell was superb as Ross, slippery in his loyalties, pivotal in hiding Fleance, and with a particularly excellent costume design.

THE TRAGEDY OF MACBETH is rated R and has a running time of 105 minutes. It opened the New York Film festival and closed the London film festival. It will have a limited cinematic release in the US on 25th December and will be released on the internet on January 14th.