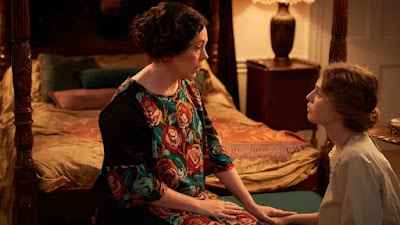 Eva Husson's MOTHERING SUNDAY is, I am sad to report, a total failure of a film. It has nothing in it to capture the interest of the viewer, and may even verge on the exploitative. This is all the more frustrating because it's an adaptation of Graham Swift's critically acclaimed novel of the same name, which told the story of a famous author and how an affair she had when working in service in the 1920s set her on the path to greatness. The problem is that this film shows us nothing of that greatness - we see no literary merit or acute perception by means of voiceover or later extracts of novels. Rather, the film merely declares the woman a success.  As a result, we are unconvinced, and don't understand why we should be interested in this author's origin story.
As the film opens we are in the last days of World War One.  The tone is one of suppressed grief and rage.  Three upper class families meet over a weekend in Henley. It becomes clear that one of them has lost both of their children in the war: the father (Colin Firth) represses this knowledge with banal cheeriness while the mother (Olivia Colman) looks sullen and detached but occasionally flares up into tears and deeply selfish condescension. Another family has lost two sons already, and the third, played by Josh O'Connor has inherited all their hopes and burdens. He must now study law and marry his deceased brother's fiancee.  He rebels by shagging the neighbour's maid (Odessa Young) and vast amounts of the film consist of them lying naked on a bed, or - once he departs for an engagement lunch - her wandering aimlessly naked around his house. This is basically 70% of the film. Will anything happen? No. Not even when a major event happens. There's no confrontation. No exposure. No dramatic tension. Nothing but boredom.
We then flash forward at intervals to the maid's second love - a black philosopher. Oh, we think, this could be really fascinating. How does a black man navigate Oxford in the 1920s? What prejudice do they face as a mixed-race couple? But no. Zero drama or character exploration here. Pretty girl gets typewriter and supportive boyfriend. Writes novel we don't see. Is apparently brilliant. We don't see it. Grows up to be Glenda Jackson. Is insufferably arrogant. Who gives a shit?
The film was so dull I started wondering what the point of the nudity was. Is it that it's meant to be sex positive? If so, cool. Apparently this is what writer Alice Birch does, or did, in her adaptation of Sally Rooney's Normal People. But I couldn't help wondering what people would say if a male director made a film that basically just followed a pretty young naked girl around with no apparent dramatic purpose.
MOTHERING SUNDAY is rated R and has a running time of 111 minutes. It played Cannes, Toronto and the BFI London Film Festival 2021.  It will be released in the USA and UK on November 19th.
Posted by Bina007 at 08:13