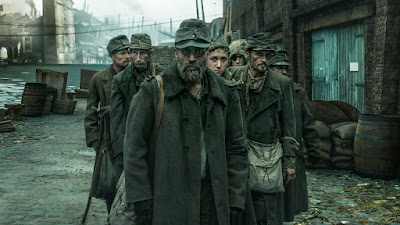 HINTERLAND is a breathtakingly fast paced murder mystery set in a nightmarish almost graphic novel/Caligari-esque post WW1 Vienna.  Actors move in front of painted backgrounds where familiar Vienna landmarks lean at queasy angles and buildings seem to fall into each other like drunken lechers. This is less contemporary Disney Habspurg Vienna than the Third Man meets Alan Moore.
As the film opens our Austrian soldiers are returning to a Vienna they don't recognise from a Russian prison camp.  Someone even has to explain what this random red white and red flag is - they are unaware that they have a new flag and indeed a new Republic. The atmosphere is febrile and antagonistic. The soldiers resent the men who didn't fight. Those who stayed at home resent the soldiers for not recognising that they too have suffered deprivations.  Food is scarce. Rats run rampant.  And a scared populace is drifting toward extremes - whether communism or fascism.
Stuck in the middle is our traumatised hero Peter Perg (Murathan Muslu). He resumes his work as a detective - thank goodness because otherwise he'd be in a poorhouse full of demobbed unemployed soldiers. Perg and his sidekicks Severin and Dr Koerner (Liv Lisa Fries - BABYLON BERLIN) are on the trace of a viciously brutal serial killer who is going after former prisoners of war.  The investigation produces utterly vicious tableaux and also explores just how brutal the war really was, especially in the Russian camps (although Perg is careful to say every side was as bad as the other).
The film is, then, nasty and eye-opening.  Growing up in Britain we learned a lot about the British war experience and even the German experience but this is probably the first time I've really sat with what happened to Austria after the war. It feels like a Nietschean world where, with the Empire dead, everything is permitted. There is no decency and few correct choices. And even in the film's mordant humour, our hero keeps being arrested by the police when he himself is the victim of a crime.
Is the film a success? I'm not sure. The design is great and the insights powerful. But the serial killer mystery seems to resolve rather easily and quickly and I felt that the inability of actors to interact with the surroundings gave the film an artifice that was ultimately distracting and undermining.
HINTERLAND has a running time of 112 minutes. It is currently playing the BFI London Film Festival and was released in Germany last week. It does not yet have a commercial release date in the USA or UK.
Posted by Bina007 at 07:59