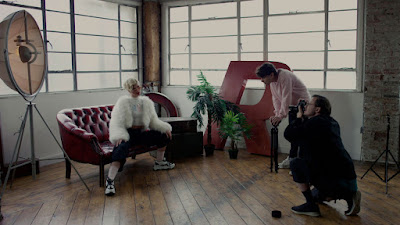 Marcos Mereles' debut feature is a really impressive, twisty, sardonic almost uncategorisable film. It launches him as a genuine new talent and someone I'll keep an eye out for in future.
The film opens in an austere warehouse location and plays like a satire on the superficial nasty world of fashion shoots. The cast is small - a photographer, his unpaid intern, a model and a make-up artist - bitching and blaming each other for the shoot's failure.  And then, around half way through, one of the characters disappears and the film takes a turn into genre-bending meta-narrative that is super-smart, very confident and utterly brilliant. This is low-budget film-making at its finest, where the limitations of cast, location and budget are turned into virtues with intelligence plugging all the gaps.

ALL IS VANITY has a running time of 72 minutes. It debuted at the BFI London Film Festival and does not yet have a commercial release date.