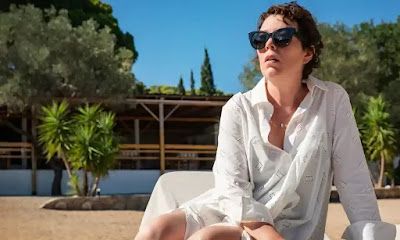 Maggie Gyllenhaal's directorial debut is a taut, superbly rendered, character-led drama featuring a bravura performance from Olivia Colman. It is faithfully based on the brutal novella of the same name by Elena Ferrante - a book that dared to ask what happens to a smart woman who dares to throw off the shackles of motherhood.
The protagonist is Leda - a middle aged literary professor who treats herself to an extended seaside holiday. She enjoys her routine of calm reflection and seems self-assured. But this calm is disrupted when her seaside idyll is disrupted by a rowdy working class family with an imperious attitude to their surroundings.
Motherhood looms large over the film. Leda becomes fascinated with a young pretty mother, Nina (Dakota Johnson), and her wilful child.  Nina seems to be stuck in a domineering marriage to her small time criminal husband. She is also steamrollered by his family, not least his sister Callie (Dagmara Domincyk) who resents Nina for getting pregnant so easily when she is only now pregnant in her early 40s. Even Nina's daughter is a mother to her cheap plastic doll. And when both child and doll go missing, Leda rescues both but somehow cannot seem to give the doll back, despite the child's ongoing distress at its lost.
It becomes clear that the doll triggers a painful and undigested memory for Leda, of abandoning her own two small daughters when they were the same age as Nina's daughter. Though happy in marriage and motherhood in theory, her inability to continue her academic work and the fact that her husband (Jack Farthing) puts his career first, becomes suffocating. A chance encounter with two travellers who have thrown off the shackles of bourgeois expectations inspires Leda. And more significantly, one of them (Alba Rorhwacher) takes a sample of Leda's writing and gives it to an influential academic, effectively launching Leda's career. It's joyous to see the young Leda (Jessie Buckley) simply enjoy the act of ordering room service and eat it in peace and quiet.
What the novel and film ask is what this means for Leda as a mother. Yes she is oppressed by motherhood, but she also does love her daughters. What sacrifices is she willing to make for career versus family? And what is the emotional cost of freedom?  In seeing Nina she sees another life lived, and Nina sees that in Leda too. Both are flirting with each other as an alternative path.  At one point Leda describes herself as an "unnatural mother" but I suspect most mothers feel that same frustration and oppression at various points of their life. It seems to be that these feelings are natural but largely unspoken.
Maggie Gyllenhaal gets so much right in this adaptation, starting with casting. Olivia Colman manages to convey so much without a word being spoken. Childlike joy at a happy moment on the beach. Anger and frustration at loud intruders. And Jessie Buckley matches her in quality to a tee. I also love how Gyllenhaal interrogates what it means to be a single middle-aged woman, where everyone feels it's their right to ask your age, and to intrude into your life - to walk into your flat and start cooking for you - to make you move from your seat to accommodate a family (because families trump single women).... And then the endless indignity of being a strong woman forced to face your fragility in a misogynistic society, from Nina's brooding husband menacing Leda as she tries to drive away, to noisy kids in a cinema who only shut up when a man tells them to.
This is a film full of emotional and physical menace and shows clearly the costs and challenges of living a full independent life as a woman where you fulfil all your potential. I guess my  only criticism of the film is that is shows an ending which is somewhat cleaner than the ambivalent version in the novel. Maybe Gyllenhaal is asking if we believe it? I felt it was just a little too tidy relative to the Ferrante.
THE LOST DAUGHTER is rated R and has a running time of 121 minutes. It won Best Screenplay at Venice, and also played Telluride and the BFI London Film Festival. It will open in cinemas on December 17th and on Netflix on December 31st.
Posted by Bina007 at 08:51