ROADRUNNER: A FILM ABOUT ANTHONY BOURDAIN**** 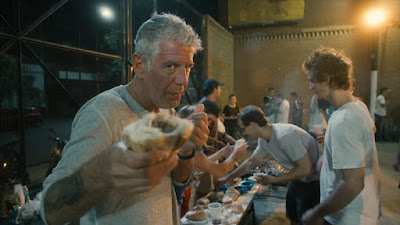 Documentarian Morgan Neville excels at producing well-researched, precisely constructed documentaries about the major pop cultural figures of our times - not least Orson Welles, Mr Rogers and Keith Richards.  In his latest film, he focuses his attention on celebrity chef and travel journalist Anthony Bourdain.  What emerges is a picture of a deeply troubled man - a junkie who beat the habit but turned that compulsive energy into relentless travel and finally an obsessive love affair. At the end, when he had achieved fame and commercial success and travelled the world many times over, he still seemed deeply lonely and depressed, maybe bipolar, and he chose to commit suicide.

I may be in the unusual position of not having read any of Bourdain's books and not having watched a single episode of his TV shows. I just knew his face as someone on TV and read the stories when he died. This was not a barrier to finding the film fascinating. Because I got to know Anthony threw his friends, fellow recovering addicts, superlative chefs, his ex-wife, his crew. He seemed to be a deeply funny, a wonderful raconteur, and a deeply erudite man who cared deeply about using his platform to show what was happening in the world that usually escapes mainstream attention.  What he doesn't appear to be is a particularly amazing chef! And I suspect, and the movie suggests, that we should truly see him as is a gonzo journalist.

As a cinephile, I found the final half hour of the movie most interesting, with Bourdain dating Asia Argento in the period where she denounces Harvey Weinstein as a rapist at Cannes, and the industry that sheltered him. Bourdain seems to throw himself into the MeToo movement with a reckless boundary-less energy that suffocates his partner and drives her away.

Overall, I found this an insightful, sensitive and honest portrait of an addict struggling with mental health issues and entirely relatable for any of us dealing with the same. I felt it could've had maybe 20-30 minutes taken out of the running time, but that perhaps reflects that I am not watching this as a pre-made Bourdain fan.

ROADRUNNER: A FILM ABOUT ANTHONY BOURDAIN is rated R and has a running time of 119 minutes.  The film played Tribeca 2021 and was released in the USA earlier this year.