TRISHNA is a fascinating, intelligent film about a relationship turned sour on the back of withheld secrets and unequal material power, centred on Freida Pinto's first performance of real merit.

She plays a poor, naive village girl called Trishna - who in her society is simply a commodity to earn to support her family, and conditioned to obey. A chance meeting with a rich young man, Jay (Riz Ahmed, FOUR LIONS), prises her away from her family and strict values. They approximate the life of two lovers in the freeing atmosphere of big city Mumbai. Given the differences in their social status, it is a measure of Jay's belief that he loves Trishna, that he's willing to broach the subject of marriage, but the revelation of secrets and the return to a cloying small-town hotel serve to subtly alter their relationship, step by step, into one of master-servant, and sexual exploitation, with alarming results. 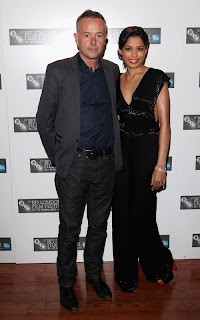 What I loved about the film was how it was able to show the drastically increasing imbalance of power in the relationship with a few elegant, economical scenes. There is very little straightforwardly scripted dialogue. Characters' actions, positions, tell us everything. Jay is rarely shown other than supine on a chair or bed, waiting for his dinner to be served to him. Trishna seems to turn within herself, visibly shrinking as the film progresses, trapped in her material dependence on Jay and her shame at her sexual history. I also loved how writer-director Michael Winterbottom didn't feel the need to show Trishna's accusers as a gaggle of villagers or hotel workers scandalised by her situation. Her emotional distress, her shame, her sense of betrayal and entrapment, is all in her own mind, and expressed by Freida Pinto in a quiet, sensitive performance. I also loved Winterbottom's willingness to simply observe everyday Indian life - a side of India rarely shown in glitzy Bollywood movies. DP Michael Zyskind's (28 DAYS LATER) evocative images of Rajasthan and Mumbai show what can be achieved with high quality DV (in sharp contrast to yesterday's MARTHA MARCY MAY MARLENE).


That said, there are some small quibbles. In the Mumbai section, I'm not sure what the cameos of director Anurag Kashyap and actress Kalki Koechlin really add. Also, I'm not sure this film should be marketed as an adaptation of Hardy's "Tess of the Durbervilles". I spent the whole film being teased into believing that a Hardy character or situation was being introduced only to realise that Winterbottom wasn't going to take the film in that direction. His adaptation contains clever elisions and contemporarises the story intelligently. But what you end up with is a quite different beast - particularly in the character of Tess/Trishna. I would suggest that by far the best way to enjoy and appreciate this film is, then, to take it on its own terms.