50/50 is that most difficult of tricks to pull off - a movie that is both raucously funny and genuinely affecting.  For that we have to thank the loosely autiobiographical screenplay from Will Reiser and direction from Jonathan Levine (THE WACKNESS, ALL THE BOYS LOVE MANDY LANE) that keeps the movie in delicate balance.  That balance is key - because this movie is about a young man struggling to beat an aggressive cancer, enduring chemo and surgery, and even then only with a 50/50 chance of survival. It's the subject matter of afternoon TV movies and melodramas.  What saves us (mostly) from emotional manipulation is the the brutal honesty and hilarity with which the topic is treated - everything from getting high on medical-strength weed, to trashing a flaky ex-girlfriends painting with eggs and knives, to exploiting having cancer to get laid by sympathetic chicks.  In other words, Reiser manages to avoid mawkishness (at least until the final fifteen minutes) by transforming his experience of cancer treatment into a "bromance" complete with adult humour.  To that end, the absolute hear of the flick is the relationship between Jospeh Gordon-Levitt as the cancer victim and all-round good egg, and Kyle - the kind of typically loud-mouthed, vulgar but heart-of-gold character that Seth Rogen always plays. The supporting cast is also first class, with Angelica Huston adding dramatic weight as Adam's mother; Anna Kendrick showing her comedic chops as Adam's therapist; and Bryce Dallas Howard deliciously shitty and cast against type as Adam's girlfriend.  If I have a criticism of this otherwise superb movie, it's that one might feel emotionally manipulated in the final reel.  I can see that intellectually, but I totally bought into the relationships in the film, was right their with Kyle in the waiting room during Adam's surgery, and enjoyed every minute of the experience. 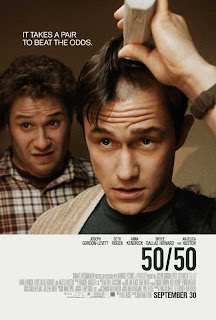 50/50 played Toronto and London 2011. It played Aspen where it won the Audience Award and  Hollywood where Joseph Gordon-Levitt won the Breakthrough Award for Actor of the Year. 50/50 opened in the USA in September. It opens in Portugal on November 10th; in France on November 16th; in Hong Kong and the Netherlands on November 17th; in the UK on November 25th; in Hungary and Japan on December 1st; in Sweden on December 2nd; andin Ireland on January 4th.