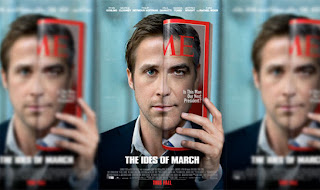 THE IDES OF MARCH is a cheap thriller full of plot holes that wants us to believe that it's an insightful, intelligent political film.  It tries to mask poor writing and construction with an all-star cast, but I'm not buying it.  This is, for all its pretensions and earnest good intentions, a bad film.  Now, I haven't seen the play on which the movie was based - Beau Willimon's Farragut North (a road on Washington DC full of political consultants).  But my friends tell me that this movie makes a departure from the closed world of that play in the final forty minutes - in other words, the movie is not content to stick with the play's obsession with the mechanics of political campaigns - and "raises the stakes" in the jargon of Screenwriting 101.  The result feels amateur and undermines the momentum and spark of the opening half hour.

As the movie opens we feel we are in good hands. The movie has pace and wit and does what a lot of great political films do - it gives us the feeling we're peeking behind the curtain at a world we're fascinated by.  We love how Stephen and Paul (Ryan Gosling and Philip Seymour Hoffman) intricately plot and plan Governor Mike Morris; (George Clooney) Ohio Primary Campaign. We love the Machiavellian scheming of their opposite number, Tom (Paul Giamatti).  We love the whip-smart dialogue from the pushy intern (Evan Rachel Wood) that Stephen's sleeping with.  The dialogue is almost Aaron-Sorkin-esque and the action takes place in seedy hotel rooms and cheap offices and bleak parking lots.  It all seems to be going so right!  We care about whether Morris' will cheapen himself in order to get an endorsement from sleazy Senator Thompson (Jeffrey Wright).  We care about whether he will win.

The problem is that the movie then takes a turn into nonsense.  The event upon which the action turns is that Stephen will take a meeting with Tom. This is anathema during a campaign - the press will jump on it. So why would a guy so smart for for it? OK, I thought, I'll go with it. But then Stephen needs to get just $900 petty cash to propel another key plot point. Does he just draw it from an ATM thus involving no-one else? No! He asks his sidekick to get it out of petty cash leaving no receipt in an open plan office! Not so smart! And if you don't believe Stephen is smart, you don't believe he can rescue the mess he gets himself into, other than through the divine right of the hero in  mainstream movies.

And what about the politics? THE IDES OF MARCH is not telling us anything new by "revealing" that idealistic politicians can make low deals and do bad things. We are a decade after Clinton. We know about sex scandals. It all seems rather old hat.

So we're left with a film whether the story is simply not credible and falls from grace into cheap thriller. The only things we can cling to are superb supporting performances from Evan Rachel Wood (who manages to make a stock character sympathetic and nuanced) and the always legendary Philip Seymour Hoffman.  Where's the elegance and sophistication that coloured Clooney's earlier directorial effort, GOOD NIGHT AND GOOD LUCK? 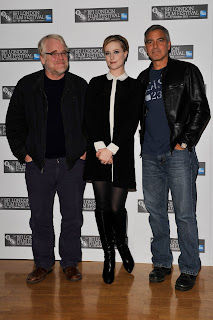 
THE IDES OF MARCH played Toronto and Venice 2011. It opens in the US on October 7th; in the Netherlands on October 20th; on October 28th in France Portugal, Ireland and the UK; on November 4th in Sweden; on November 11th in Finland; on December 22nd in Germany; on January 5th 2012 in Hungary and on February 14th in Russia.
Posted by Bina007 at 23:21