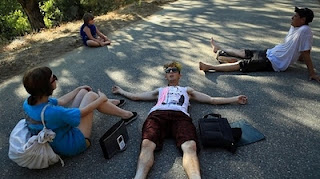 Tristan Patterson's award-winning debut documentary feature does not live up to expectations. To be sure, Patterson and cinematographer Eric Koretz shoot landscape beautifully, and even set up some stylish chiaroscuro shots. And the soundtrack (Dave Golden, T. Griffin) is superlative. I even like the quirky organisational device of splitting the short 80 minute doc into 11 segments, counting down to zero.

The problem is the way Patterson treats his subject matter, pro skate-boarder Josh "Skreech" Sandoval. Patterson chooses to let Sandoval tell his own story, and to capture his present, in a naturalistic, almost naive, cinema vérité style. So we see a one-time apparently committed pro-skater, on the come-back from depression, doing pretty much anything but skate - he drinks, smokes, does pills, and hangs out. And that makes for pretty dull viewing. There's no narrative progression - no emotional arc - nothing. Just a dispiriting display of a young man pissing his life away. I'm sure this is partly Patterson's idea - presumably he wanted to show us the gritty reality behind the "rad" image most kids would have of the life of a pro-skater. It's less about scoring free merchandise than scoring a place to stay when you're homeless.

To be sure, there is value in debunking the myth. But this documentary could've been so much more interesting if Patterson had really engaged with his subject rather than simply observing - if he'd dared to explore Skreech's childhood and depression further. To that end, DRAGONSLAYER struck me as rather similar to LAWRENCE OF BELGRAVIA - also showing at this year's festival. Both documentaries look at marginally successful showmen and hints that their self-destructive relationship with drugs has its origins in childhood trauma - but neither take us beyond that superficial description to the heart of the matter. As a result, both documentaries suffer from the same problem - they never get beyond the initial interest of meeting a new character. They simply don't progress. The upshot is that you end up totally reliant on whether you like the character enough to find the film compelling - probably yes in the case of LAWRENCE - probably no for DRAGONSLAYER - and when the central character isn't compelling I'm not sure how far the wonderful visual stylings can fill that hole.

DRAGONSLAYER played SXSW and Hot Docs where it won awards for Best Documentary Feature and Best International Documentary respectively. It will be released in the US on November 4th.
Posted by Bina007 at 23:05