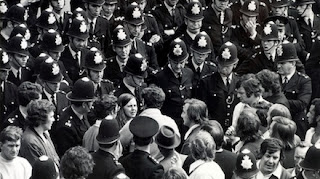 BERNADETTE: NOTES ON A POLITICAL JOURNEY is a simply brilliantly made documentary about a simply amazing woman. A woman, mind you, that I hadn't heard of before I sat down to watch the movie, but that I am now convinced is a deeply important figure in British and Irish political history - the kind of woman we should be taught about in school. The sad thing is that while I think this movie should be seen by all, it doesn't yet have a commercial release date - in fact it doesn't even have a page on IMDBPro! - something I hope will be rectified by the end of the festival.

Bernadette Devlin's story begins in an impoverished large Catholic family in Northern Ireland in the 50s and 60s. Orphaned early, raised by strong women - grandmothers, nuns - she became a radical politician in university, battling for Irish civil rights. She was the youngest elected MP in decades; served time for her actions at the Battle of the Bogside; witnessed Bloody Sunday; and punched Reginald Maudling in the House of Commons when he claimed the police shooting of unarmed civilians was in self-defence. In the 1970s she suffered an assassination attempt by the UFF - an attempt the police did nothing to present - and was a powerful voice during the early 80s hunger strikes. And in the 1990s she was effectively blocked from opposing the peace process when her daughter was dragged through the courts. Throughout, she comes across as fiercely intelligent, full of integrity, and inspiring.

Director Lelia Doolan brilliantly fillets the historical record - TV footage, newspaper headlines - in support of her candid interviews with Bernadette over the past decade - the real strength and heart of the film. The resulting film feels well-researched, economically told, and full of genuine insight. Bernadette's voice feels unmediated, full of integrity and compelling. And I didn't miss talking head interviews with her contemporaries - because of the way in which the archive footage was used.

Earlier this week, I was listening to a Radio 4 programme where an author reminded us that the "first" British Empire, was the Empire at home - the conquest of Wales, Scotland and Ireland. It's something that is easy to forget. It's also easy to forget how recently that political entanglement was causing violence - from the hunger strikes in the early 80s back to Bloody Sunday and before. It's also easy to forget that while our civil liberties were massively eroded in the post 9/11 period - and we were horrified about detention without limit in Guantanemo - that these policies were all in action in Northern Ireland long before - with internment camps and the brutalisation of the Catholic population. I guess what I'm trying to say is that it is unforgivable not to try to understand the Irish conflict better, and that this documentary is a crucial and valuable part of that process. It deserves to be seen as widely as possible.

BERNADETTE: NOTES ON A POLITICAL JOURNEY has no commercial release date yet.
Posted by Bina007 at 20:16