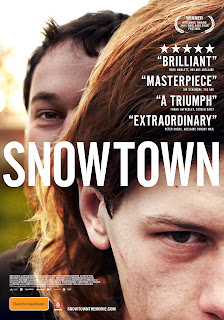 SNOWTOWN is a searing, brutal movie about Australia's most notorious serial killer. An assured and powerful debut feature from Australian writer-director Justin Kerzel - it contains scenes of such explicit torture that in the screening I attended, a dozen people walked out at around the seventy minute mark.  But the unflinching depiction of torture should not distract us from the intelligent and nuanced depiction of psychological manipulation that brought to the point where one powerful psychopathic personality could commandeer a crew of three of four young men all complicit in murder.  To that end, SNOWTOWN is fascinating not just as an examination of this particular case, but of all those cases in which a charismatic personality creates heinous gang behaviour - the Manson Family, for example.

The movie opens with Kerzel deftly establishing the poverty and claustrophobia of smalltown life, centring on the extended family of Elizabeth Harvey - her brood of step-siblings. They badly need a father figure and in walks charismatic apparent family man, John Bunting.  He immediately asserts his personality, cooks meals, asserts discipline, and the mother almost looks happy. But behind his almost cherubic, bearded, cuddly image, we soon learn that he is capable of snap judgements about who is a menace to society - mostly gays and paedos, a seemingly interchangeable category for him, but then junkies, bullies...anyone in the wrong place at the wrong time.

For the first hour of the film, Kerzel exerts supreme self-discipline.  Bunting's power is shown in a couple of breath-taking set-piece scenes around the kitchen table. where he builds on the innate bigotry of his neighbours to whip up a lynch-mob frenzy.  We suspect he is already killing people but the only thing shown on screen is a still shot of a bathtub covered in bloody hand-prints from tortured victims - incredibly powerful. But then, in the second hour, Kerzel shows us exactly what has been happening starting with a scene where we see Bunting goad his girlfriend's teenage son James into participating in the torture of the boy who raped him.  That scene is necessary to show how a fragile boy could be psychologically broken, but the following scenes of torture did at times seem to verge on torture porn.

That's a small criticism, though, and shouldn't distract from the fact that this is a brilliantly crafted film (DP Adam Arkapaw - ANIMAL KINGDOM) that doesn't fall for the typical "police hunt serial killer" genre tropes. Rather it focuses on Bunting and his crew, what they did, and how they did it.  Daniel Henshall, despite his soft features and friendly face, is absolutely terrifying and magnetic as John Bunting. Late on, there's a scene where the camera looks at him head on sitting in a chair smiling. It's so sinister that we are petrified of what we will see when the camera pans round to show John's point of view.  That's the power of the performance. Young Lucas Pittaway as the James, the kid John manipulates, is also deeply sympathetic, although I was conscious throughout that the film, like the trial, was essentially based on his evidence. One wonders whether he really was such an unwilling and unwitting part of the gang.  At any rate, this is a must-see film, although be warned about the ultra-violence it contains.

SNOWTOWN played Cannes 2011 where it won the FIPRESCI Prize - Special Mention. It opened in Australia in May 2011 and opens in the UK on November 18th and in France on December 28th.
Posted by Bina007 at 14:15