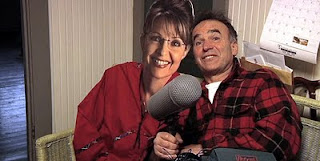 SARAH PALIN: YOU BETCHA! is a really bad documentary.  Risibly, embarrassingly so.  And here's why.  1) There's no balance. 2) There's no insight.  3) There's no context and therefore no relevance. 4) Cheap stunts undermine the purported aim of the project.

1) There's no balance.  Directors Nick Broomfield (AILEEN: THE LIFE AND DEATH OF A SERIAL KILLER) and Joan Churchill (BATTLE FOR HADITHA) claim that they're going to Wassila, Alaska to discover the true Sarah Palin.  They claim they aren't making a "hit movie".  But that's bollocks.  They clearly had already made up their mind about Palin  before they made their movie. They are evidently delighted that it turns out to be a character assassination.  There is no balance.  No attempt at context.  No real seriousness. Where are the interviews with her supporters? If no-one in Alaska would speak to them, why not talk to her supporters in other states - ordinary folk and political operators. Why not attempt to understand her appeal, beyond her charisma? They claim that they want to take her seriously as a political threat, so why not do just that?  But no, this isn't that kind of film.  This isn't serious engagement with the rise of the evangelical right wing, but a cheap National Enquirer type story.

2) There's no insight. One has to assume that anyone who wants to see this movie knows who Palin is and follows US politics. And if that's the case - if you already know about Troopergate; watched those Tina Fey impressions; saw Palin on Fox and watched her popularity plummet after the shooting of Gabrielle Giffords - this movie really doesn't add anything to your knowledge.  I mean, we all know that Palin is ill-educated and ill-qualified for office - that she abhors scholarship, has anti-diluvian anttitudes toward homosexuality, and has used power to pursue personal vendettas. That's why she's know so unpopular that she isn't standing for the presidency.  The only genuine coup is an interview with Trooper Mike Wooten, Palin's ex brother-in-law who she got fired from his job.

3) There's no context and therefore no relevance. The tragedy for Broomfield and Churchill is that their subject matter was crumbling beneath them during production.  Palin had already been eclipsed by Michelle Bachman during filming and during editing not only did Palin's star fall, but by now even Bachman looks irrelevant. Even Rick Perry's numbers have gone South.   The film-makers delude themselves into believing that their documentary contributed to Palin's decision not to run but one suspects that they have come woefully late to the game. The film-makers could've made their movie still seem relevant if they had made more of an attempt to look at the wider movement Palin helped create - The Tea Party - and rise of popular evangelical politics.  Palin's particular character failings have made her unlikely to hold office again, but she remains a kingmaker, and if that's her continued threat, then it needed to be explored. What precisely is her continued power?  Why do ordinary people respond to her? It isn't enough to say personal charisma. We need to understand what she says.  Sadly, this just isn't that kind of film.

4) Cheap stunts undermine the purported aim of the project.   The film-makers claim that while most British people treat Palin as a joke, they wanted to treat her seriously, reflecting the threat that her presidency would be.  But that's belied by Broomfield's trademark, semi-Michael-Moore penchant for cheap stunts and putting himself in the frame.  It starts with shooting fish in a barrel - anyone can, after all, find video footage from Christian fundamentals showing rapture that looks ridiculous to liberal eyes. And continues with cheap tricks: Broomfield getting up with a megaphone at a Palin speaking engagement - or chasing her down at book signings.  Hardly dignified, and not even that funny - just rather pathetic.

Let me be clear. I hold Palin in contempt. But she was for a time a serious political threat, and the movement she represents still is.  This documentary was a valuable opportunity to explore that threat - but instead it looks cheap, nasty, and given it's narrow focus, sadly irrelevant. I suspect that Palin's decision not to run will seriously affect its chances of distribution.