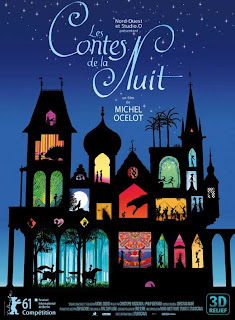 In the cynical world of commercial cinema, there is something heartening and wonderful about the French animator Michel Ocelot.  He creates films of such vivid colour, beautiful design, and delicate style that you can't help but admire them.  And even better, he sees himself as an entertainer in the most old-fashioned sense. He simply wants to give us, the audience, pleasure, and can see no better way than by using the ancient fairy-tales from around the world that have held us captivated for centuries.  Ocelot's latest film is not a single-story feature, in the manner of KIRIKOU AND THE SORCERER or AZUR ET ASMAR, but a compendium of six short stories, each set in a different mythical land - from Africa, to Aztec temples, to the Himalayas, to the medieval Europe of the Brothers Grimm. His tales are filled with princes and princesses, young lovers who conquer evil, magic necklaces and tom-toms, werewolves and evil dragons.  The style is like something out of a magic lantern show projected onto colourful, richly textured tapestries - a style that feels perfectly suited to the 3D in which the film is presented. I found the movie to be an absolute delight.  Never simple-minded, but containing an economy of design and a simplicity, maybe purity, of purpose that was refreshing and delightful.  And judging by the young audience, many too young to read the subtitles and certainly too young to understand the French, once again Ocelot has created a film in which the images are so powerful and delightful that they can communicate clearly and entertain regardless.