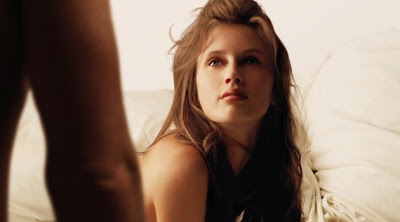 ‎I am still mulling over François Ozon's bored teen turns hooker drama, JEUNE ET JOLIE. I'd heard about references to the iconic BELLE DE JOUR and expected something fantastic and weird and subversive and instead I got something that was...well...rather dull.

The movie takes place over the course of a year with an affluent Parisian family. The 16 year old daughter, Isabelle loses her virginity in a rather perfunctory manner on a summer holiday, and when she returns to Paris goes on the game. Around half way through the film her family discover her secret, as one of her nicer but older tricks dies in media res, naturally leading to police involvement. The family react in an incredibly dignified manner, and it's all very French and open. They even tell her precocious kid brother.

The result are some rather funny scenes of family discomfort, particularly involving the stepfather. But overall we don't really come any closer to understanding what Isabelle is up to: other than a mild aversion to boyfriends she's just slept with. Of course, there's nothing wrong with mystique and enigma, as anyone who's watched BELLE DE JOUR knows.   But with Isabelle it's less assuming glamour and more frustrating opacity.

Still, I'm a big fan of Ozon and would like to suspend my judgment until I've seen this flick another time.

JEUNE ET JOLIE aka YOUNG & BEAUTIFUL has a running time of 95 minutes.

JEUNE ET JOLIE played Cannes 2013 and opened earlier this year in France, Belgium, Estonia and the Netherlands. It opens in Italy on November 7th; in the UK on November 29th and in Denmark on July 10th.
Posted by Bina007 at 17:04