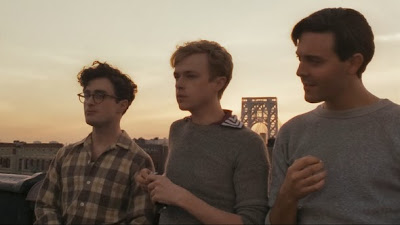 KILL YOUR DARLINGS is a compelling, moving, beautifully produced movie about a dark emotionally manipulative relationship at the heart of the Beat generation.  You don't have to be fascinated by the Beat poets to be sucked into this tale of youthful exuberance, and malevolent sexual desire, so brilliantly is it crafted.

What most people know about this film, is that stars Daniel Radcliffe of Harry Potter fame as a young Allen Ginsberg, years before he wrote Howl - a naive innocent Jewish boy arriving at Columbia and dazzled by the charismatic proto-Beat writers he meets.  But really, this isn't his film, although he's a key observer and interpreter of it - our eyes and ears inside the chaos.  Really, the film is about Ginsberg's fellow Columbia student, the charismatic but deeply troubled Lucien Carr (Dale Dehaan) and his disturbed relationship with the older David Kammerer (a heart-breakingly good Michael C Hall).  When we first meet the pair, standing in Ginsberg's shoes, it seems like it's a relationship of equals.  Kammerer is obsessed with Carr, but Carr uses Kammerer to his advantage, making him write his papers.  It feels like Carr, if anything, has the upper hand.  But as the movie progresses, we learn that Kammerer isn't just a jealous boyfriend, and Carr may not be confident in his sexual orientation.  In fact, Kammerer could well be a predatory stalker.  I guess we'll never know why and how the obsessive love story ended how it did, but I love how director John Krokidas deftly navigates the spidersweb of conflicting stories and motivations. It feels fair, and fascinating, and real, even if, in reality it wasn't a possessive Ginsberg that told Kammerer where Carr was, but an unaware Kerouac.

The cast is superb throughout. In smaller parts, I loved the sinister strangeness of Ben Foster's well-heeled heir William S Burroughs, and the carefree charm of Jack Huston's Jack Kerouac.  In the larger roles, Daniel Radcliffe is nuanced and charismatic and conflicted as Allen Ginsberg, creating an extreme version of a relatable character - the wide-eyed kid suffering his first unrequited love affair at college.  And the way in which his eyes are opened to intellectual thought - the way in which those early college friendships can change your life - made me nostalgic for my own freshman year. But as I said before, this is really a movie that belongs to Dane Dehaan and Michael C Hall - so lucid and sympathetic and fragile and tragic.  Truly heartbreaking stuff, especially from Michael C Hall, and I hope we see more of him on the big screen now that his time as Dexter is up.

And finally, kudos to first time feature director John Krokidas who has fashioned a movie so elegant, and intricate and confident that it's amazing to think it's really his first film. I loved the way in which he folded and moulded time, using flashbacks in a totally unconventional way. I loved the way in which he could direct both the comedic caper movie material as well as the emotionally intense material - and his feeling for editing together the great pivotal scenes.  His direction is so brave and assured that I am truly excited to see what he does next.

KILL YOUR DARLINGS has a running time of 104 minutes and is rated R in the USA.

KILL YOUR DARLINGS played Sundance, Venice, Toronto, and London 2013.  It goes on release in the USA and Italy this weekend, in Greece on November 7th, in Canada on November 8th, in Australia on December 5th, in the UK on December 6th, in Germany on January 30th and in Brazil on February 14th.
Posted by Bina007 at 23:34