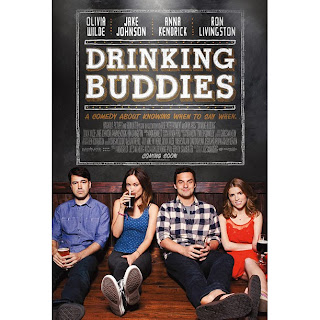 There's a lot to like in Joe Swanberg's relationship comedy, DRINKING BUDDIES.  He moves on from the narcissistic, solipsistic mumble core stylings of UNCLE KENT to something more mainstream and accessible, but manages to keep the emotional authenticity of his previous work.

Olivia Wilde is fantastic as Kate, a fun-loving, rather fragile girl who works at a micro brewery with her best friend Luke (Jake Johnson of THE NEW GIRL fame).  They have one of those close friendships that verges into sexual chemistry and we feel sure that they're with the wrong people.  This is compounded when we realise that their respective others, played by Anna Kendrick and Ron Livingston, are also actually pretty well paired, and should probably get together.

In any other movie, this would descend into a cheesy play by numbers rom-com in which Chris breaking up with Kate and Kate rebound sleeping with a sleazy coworker would spark Luke into jealously realising that he should be with Kate all along.  But this isn't that movie. Instead, in a number of closely observed scenes, we get Jill go on vacation, leaving Kate and Luke to become closer but also to be exposed to what each of them really up is and wants.  As an audience, we realise that Kate really isn't as attractive as all that.  She quite immature, maybe developing an unhealthy dependence on alcohol.  And while Luke seems like a similarly fun loving guy, he's actually a lot more grown up.  In fact, the seemingly perfect couple if-only-they-knew-it, well, isn't.

The joy of this film is seeing the largely improvised and naturalistic way in which these relationships evolve and unravel.  I love that it subverts and depends the classic rom-co characters and tropes.  And I love that I genuinely liked the characters and wanted to see what happened to them.  Kudos to all involved.

DRINKING BUDDIES has a running time of 90 minutes and is rated R in the USA.

DRINKING BUDDIES played SXSW and London 2013. It opened earlier this year in the USA.  It opens in the UK and Ireland on November 1st.
Posted by Bina007 at 13:27