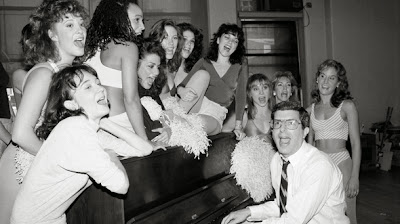 Dori Berinstein's documentary about the legendary musical theatre and cinema composer Marvin Hamlisch is an absolute joy to watch, thanks to the wonderful, exuberant personality of its subject, and the access to so many of his collaborators sharing what are evidently authentic feelings of warmth and tenderness for him.  You leave the cinema feeling like you really knew the man, and that his musical achievements were really secondary to his humour, passion, and empathy.

But of course, we wouldn't be here if it weren't for his talent, and it's worth taking a moment to recap just how amazing he was.  A musical prodigy born to a Viennese Jewish family who'd escaped the Holocaust for New York, he entered Juilliard at seven, won three Oscars in a single year in his mid twenties, and had a smash hit musical and Pulitzer Prize by his thirties.   He scored Woody Allen flicks like Bananas, as well as The Way We Were, The Spy Who Loved Me and Sophie's Choice. He left Hollywood for a little off-Broadway production that became A Chorus Line.

If there's any sadness to the story it's that his key collaborators on A Chorus Line died so young.  One wonders just what other smash hit musicals he might have written had he been able to find a stable long running collaboration along the lines of Rodgers and Hammerstein or Lerner and Lowe.  Not that I want to sound like I'm calling him an underachiever.  It's just that - and the movie tackles this in some detail, when you've one three Oscars in your early twenties, where do you go from there?

Dori Berinstein's movie pays full tribute to the man and his music.  Her long track record on board way has given her access to all the key people, most movingly Hamlisch's family and his early home videos.  Her organisation is impeccable and the movie a joy to watch.  I also think it's not going too far to say that this movie has something to teach, and laughter to give, whether or not you care about musical theatre.  And that's testament to the greatness of the man at its heart.