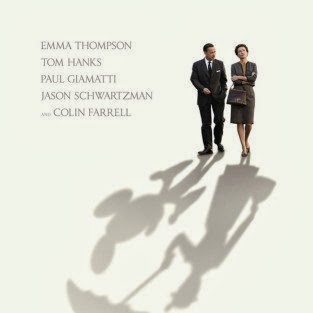 SAVING MR BANKS is an emotional drama about the making of the Disney musical comedy, MARY POPPINS.  Specifically it's about the relationship between the apparently frosty British author P. L. Travers (Emma Thompson) and the jovial studio boss, Walt Disney (Tom Hanks). The reductive psychology of the movie is that Mrs Travers is stubbornly opposed to anyone trivialising her book with animation or songs because it is so intrinsically linked to her childhood trauma.  In flashbacks, we see her a small girl, living in a small Australian town, doting on her charming father (Colin Farrell) and drowning in guilt that she couldn't save him from his alcoholism.  As we move back and forth between her Australian childhood and 1960s Hollywood, we know only too well that the movie WILL be made, and it will contain dancing penguins, and songs, and Dick van Dyke with that ghastly attempt at a cockney accent.  And this takes much of the suspense out of the movie - it's only a matter of time before Travers capitulates to Disney's oleaginous charms and has a final act moment of catharsis at the première.

The movie is simplistic and problematic. At times it reads like propaganda for Disney - who comes across as a thoroughly decent, fun-loving papa-bear in line with his public persona.  The psychology is reductive.  And there's way too much time spent watching Emma Thompson look stern and disapproving.  But in flashes - in moments - it really works. There's something wonderful and close to the bone in Colin Farrell's portrayal of a drunk but loving father.  There's a magisterial beauty to a pivotal scene on a lake at night.  And the Aussie landscape in general is just stunningly filmed, so kudos to the cinematographer John Schwartzman (THE AMAZING SPIDERMAN).  I also loved Paul Giamatti as Travers' Hollywood chauffeur. It's a relationship designed to be emotionally manipulative by the writers (Sue Smith and Kelly Marcel of the troubled FIFTY SHADES OF GREY) - the emotionally closed-off writer who forms an unlikely friendship with the warm-hearted writer - but it's hard to resist the genuine chemistry and high quality acting.  But overall, one can't help but feel that this movie would be a whole lot better if it were half an hour shorter, or had had the courage to be as forensic about Disney as it was about Travers.

SAVING MR BANKS has a running time of 125 minutes and is rated PG-13.

SAVING MR BANKS played London 2013 and is released in the UK on November 29th, in the USA on December 13th, in Turkey on December 20th, in Australia on December 26th, in Hong Kong, Brazil and Spain on January 10th, in Argentina on January 23rd, in Germany on January 30th, in Denmark, Italy and Sweden on February 21st, and in France and Singapore on February 26th.
Posted by Bina007 at 23:10