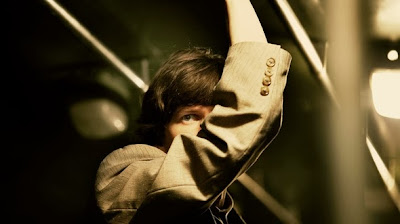 Richard Ayoade is a British comedian who has adopted a persona of being a somewhat geeky tongue-tied boy-child and the fact that he carries that over to his stage persona as a director, introducing his sophomore directorial effort is something that I find utterly bizarre as somewhat irritating. It's as though he feels pressured to play up for the crowd, which in fairness lapped up his comedy introduction.  But as some point, is he not going to be hamstrung by his fluttery, flapping persona?  Is it not going to undermine the seriousness with which we approach his work.

I guess if anything positive is to come from what I found to be an ingratiating introduction, it's that Richard Ayoade understands what it is to have a split persona, if not a split personality as the protagonist in his new movie does.  The movie is based on a technically complex Dostoyevsky novella (which is itself a pastiche of Gogol) that depicts the schizophrenic breakdown of a government bureaucrat when his imagined doppelgänger steals his prestige at work and the admiration of his social circle.  Ayoade transfers this story to a highly stylised dystopian steampunk world in which James Simon, or is it Simon James works for a disturbing fascistic sounding "Colonel" in some kind of inane bureaucratic work in a world of cord-phones, 8-bit computer games and Pastiche Soviet austerity.

Jesse Eisenberg (THE SOCIAL NETWORK) carries the movie as both the repressed, shy, bullied protagonist and his suave, ingratiating double.  But he is ably supported by Mia Wasikowska as his manic pixie dreamgirl, Wallace Shawn as the blasé boss, and most brilliantly, Paddy Considine as a spoof TV superhero to which the repressed protagonist aspires.  I loved the grungy, brown-green-sallow production and art design of David Crank (LINCOLN) and Dennis Schnegg (TRANCE) and the expressionist lighting from cinematographer Erik Wilson (NOW IS GOOD) is inspired.  The sound design from Adam Armitage - so often expressing the protagonist's schizophrenia is also a major part of the mood and success of the film.

But for all that I couldn't shake off the feeling that I'd seen the movie before - or at least that this movie was channelling, in a weaker diluted form, greater achievements.  It reminded me of Gilliam's BRAZIL and, in its production design, Jeunet's DELICATESSEN and in its final infliction of mutual injuries, FIGHT CLUB of all things.  Which brings me to my final problem with the work - the murkiness surrounding what is actually going on with Simon/James.  Is he really schizophrenic, in which case why do people around him respond to both characters simultaneously?  There isn't the scrupulous observation of formal separation that we see in FIGHT CLUB. For those two key reasons, for all its formal accomplishments and marvellous acting, I wasn't massively impressed with THE DOUBLE as a directorial effort.

THE DOUBLE has a running time of 93 minutes.