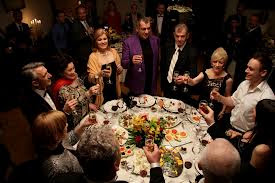 Having seen the Romanian tragedy, CHILD'S POSE I can only say that it is an utterly deserving winner of this year's Berlin Golden Bear. Superbly acted brilliantly written, it combines flashes of wit with a truly pessimistic insight into a corrupt judicial system and unequal society.

The story is simple and told in a straightforward manner, although that underplays the emotional complexities within. Cornelia is a well-heeled mother in contemporary Romania, living a privileged life. Her only concern is her uncaring son, who throws her smothering love and protection in her face, bristling at her control. This relationship is put to the test when the son kills a teenage boy while speeding. What's shocking is how instinctively and immediately his parents swing into the cover up, and much of the film follows Cornelia as the goes through the delicate process of bribing, colluding and cajoling police officers, witnesses and experts. She never once questions the ethics of what she does: her maternal love trumps all.

What's fascinating is the emotion behind this "corruption procedural". Cornelia's jealous, condescending attitude toward her son's lover, for instance, changes when she realises that he treats her as callously as she treats Cornelia. And the final scene, in which Cornelia must visit the grieving parents is a slippery mix of genuine angst for her son's future; a self-interested need to clear her conscience; and the need to get them to drop the case.

The result is a film that is emotionally gripping, gives us a window into a strange and disturbing world, and that features a stunning performance by Luminita Gheorghiu shines as a controlling mother who goes into overdrive when her adult son runs over a child. It is not to be missed.

CHILD'S POSE has a running time of 112 minutes.

CHILD'S POSE played Berlin 2013 where Calin Peter Netzer won both the Golden Bear and the FIPRESCI Prize.   The film was released earlier this year in Romania, Germany, Italy and Taiwan. It will open in Denmark on November 14th.
Posted by Bina007 at 13:38