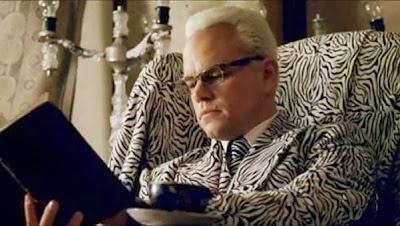 Aaargh! I wanted to love ZERO THEOREM, I really did! And I loved the satirical visual in-jokes, the rambling shambolic wonderfully inventive Terry Gilliam trademark production design. There were individual moments of genius - Tilda Swinton's cyber-psychologist starting to rap her advice when her programme gets buggy - Matt Damon as the evil totalitarian overload "Management" wearing suits that camouflage against his furnishings - singing pizza boxes - oh the list goes on!  But I just found it so hard to grab hold of the movie.  It kept slipping through my fingers.  I just didn't empathise with the protagonist, or get an idea of what the stakes were, or know who I wanted to win, or what winning even was. And without any kind of anchor, the visual tricks became tiresome, after a while.

The movie stars the charismatic Christoph Waltz against type as Qohen Leth - a kind of mad Uncle Fester, shaved and paranoid, living in a ramshackle old church, working for some kind of tyrannical company, waiting delusionally for the phone call that will give him the meaning of life. Into this world comes the fantasy girl Brainley (Melanie Thierry) - a kind of cyber-punk take on the "hooker with a heart of gold" trope - as well as what turns out to be Management's son (Lucas Hedges) - a smart-talking IT genius - both of whom have been sent to help Qohen Leth with his mission.  And what is that mission? To solve the Zero Theorem, proving all life as meaningless.

That's about as much plot as we get.  What this movie is really about is satire on contemporary society - the paucity of modern relationships in a world of cyber-communication - the trashiness of online sex - the wince-inducingly naff adverts - the  dependence on therapists and pills - the alienation of atomised man. All this amongst visuals that give us a feeling of childlike whimsy and a society disappearing up its own proverbial. If only Richard Ayoade's dystopia in THE DOUBLE had had one percent of the imagination of this film. And if only this film had had one percent of the true emotion that Ayoade found at the heart of his story. Alas, it was not to be.

THE ZERO THEOREM has a running time of 107 minutes.

THE ZERO THEOREM played Venice and London 2013 and opens in Italy on December 19th and in Russia on January 2nd.
Posted by Bina007 at 23:25