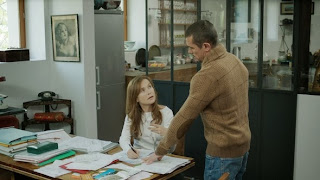 What a disappointment!  Catherine Breillat's new movie was meant to be a profound psychological exploration of the nature of complicity in exploitation. It was meant to be a painfully close to reality examination of her own devastating stroke and ensuing experience of being fleeced of a million euros by a conman.  We were meant to debate and be provoked by whether she was really a victim of abuse, or whether in knowingly inviting a convicted criminal into her life, she was somehow buying attention and excitement every time she wrote him a cheque.

Instead, we get a movie that is slow paced and opaque.  A movie that seemingly wastes two strong central performances from Isabelle Huppert as the Breillat-like stroke victim director and Kool Shen as the remarkably un-charming conman.  After a stunning opening segment that depicts the stroke and rehab, we switch into a very long drawn out con.  In fact, it's not really a con.  He asks for money.  She gives him a cheque.  She even sees that he's spending the money lavishing handbags on his wife and drinking good one.  But when he asks for more, throwing a tantrum if he doesn't get it, she almost automatically, without emotion hands it over.

What I found most frustrating about the film is that there was no rail conflict there.  She wasn't charmed or manipulated.  She needed someone, he was there.  But any hint at complicity, at the masochism the director relates in the scenario of her forthcoming movie, is entirely absent from the script or performances.  The result is then a rather banal procedural that ends in an untimely unsatisfying and uninvolving confession.

ABUSE OF WEAKNESS aka ABUS DE FAIBLESSE has a running time of 105 minutes.