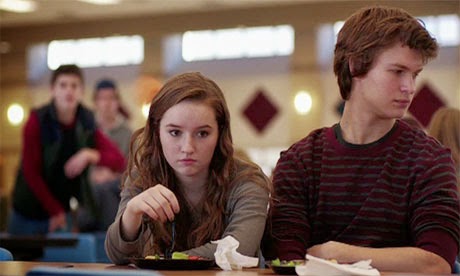 Whatever happened to Jason Reitman?  He started off with these scabrous satires like THANK YOU FOR SMOKING - that were wicked and smart and hugely enjoyable.  But last year his movie LABOR DAY - a holy overdrawn melodrama starring Kate Winslet and Josh Brolin flopped onto the screen at the London Film Festival only to be trumped by this year's banal, trite and utterly superficial attempt at social comment: MEN WOMEN AND CHILDREN.

The film is meant to be an insightful and tragic depiction of the nefarious influence of IT on modern life but it has nothing new to say. Yes we know teenage girls find it easier than ever to fall into body dysmorphia in online chatrooms, and we know porn is easily and corrosively available, and we know that some people see reality TV as a means not only to be successful but as a validation of self.  This stuff was done with FAR more credibility and subtlety and artistic integrity in Sofia Coppola's BLING RING, for example. Or indeed, the second time I'm quoting this film in two days - Gus Van Sant's TO DIE FOR.

All we have here is a very conventionally filmed portfolio movie in which a wide cast of characters struggle with their own isolation and anomie - something, by the way, that wasn't invented with Facebook or even Durkheim.  It's a waste of a stellar ensemble cast and god forgive Reitman for the pretentious Voyager satellite metaphor and the utter embarrassment of a narrative voiceover from Emma Thompson.

MEN, WOMEN AND CHILDREN has a running time of 116 minutes. The movie played Toronto and London 2014 and opens wide in the USA on October 17th. It opens in the UK on October 24th, in France on December 10th and in Germany on December 11th.
Posted by Bina007 at 17:31