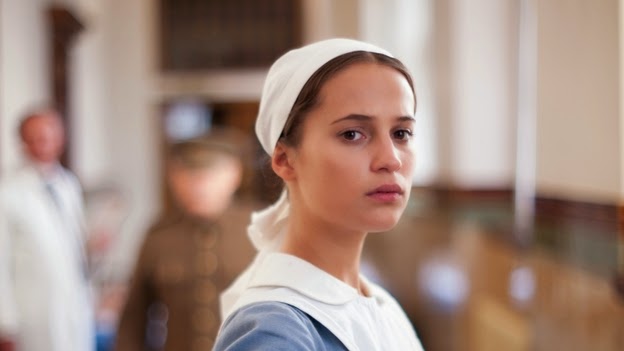 TESTAMENT OF YOUTH drips in heritage quality. It feels like it should be a miniseries shown on ITV before Downton Abbey. It’s all beautiful people in gorgeous costumes full of earnest good intentions. There aren’t any bad people or real arguments. And the misery of the trenches is only briefly shown. Rather, in these memoirs from the real-life pacifist author Vera Brittain show the experience of World War One through the eyes of a woman necessarily at one step removed from the horrors of the front line. And if we occasionally see a soldier suffering from the blisters of mustard gas or an amputation it is done with utmost delicacy. For this is war diary as romantic drama - all soft light and longing glances and thwarted love.

I don’t mean to belittle the subject matter but it’s hard to take it seriously when the director James Kent (tellingly a TV director) seems so loathe to truly engage with the substance of the film. He is keenly interested in the love story but blunts the radicalism. Vera Brittain was an intelligent woman who had to fight to gain entry to Oxford University at a time when women couldn’t formally receive a degree. But on the point of her firebrand feminist speech she falls for dreamy Roland Leighton - a schoolfriend of her brother’s - and abandons Oxford to become a nurse. At this point her politics and aspirations are shifted very firmly to the back of the film, where they appear in a short coda. They feel utterly out of character for what has turned out to be a rather conventional character. A nurse at the start of her training tells Vera that she may have joined the nursing corps with the romantic ideal of being a ministering angel. Well, that’s precisely what this movie shows.

I find myself trying to think how radical Brittain’s memoirs must have appeared at the time, especially if (as in the film) they hint at homosexual love, feminism and the sheer waste of lives that World War One entailed on both sides. We are told in the programme notes that her book was considered to be “the voice of a generation” and was immensely popular. One can’t imagine that such a radical generational voice was really depicting events in the manner of grand heritage drama. And that is a great shame.

Are we are going to go through the centenary of the First World War refusing to look it squarely in the eye - refusing to pull back from the individual love story to the wider view? Indeed I can sum up that hesitancy on the part of the director in one shot around half way through the film. Vera comes out of her nursing hut to the back of the building where many victims of a mustard gas attack have been laid out. It’s a scene crying out for the director to crane up from Vera’s personal fears to the wider context of immense human suffering. But James Kent doesn’t have the guts to pull back wide enough to make this visual and historic point.

In other words, this is a highly conservative film pandering to World War One nostalgia - brave and decent men and women thwarted by war. It seeks no greater insight nor any greater cinematic style.

TESTAMENT OF YOUTH has a running time of 130 minutes.  The movie played the London Film Festival and opens in the UK on January 16th, and in Denmark on April 30th.