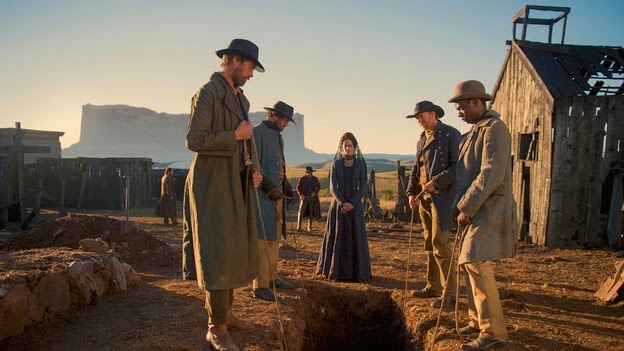 THE SALVATION is a beautifully made, powerfully acted, good old-fashioned Western. There's no meta-narrative, no post-modern reworking, no reimagining.  It's "just" an immensely satisfying  short, taught, austere tale of good, evil and justice served in the Wild West.  I loved every minute of it.

The film is set over a couple of days in a dirt town in 1871.  A Danish ex-pat soldier called Jon (Mads Mikkelsen) greets his wife and young son from the train, reunited for the first time in seven years.  They travel by stagecoach to their ranch, but a couple of thugs rape and kill his wife and son, with Jon utterly powerless to protect them.  He quickly takes his revenge but this sets off a train of violence: the rapist was the brother of the local crime boss Delarue (Jeffrey Dean Morgan).  The townsfolk, led by the callow Sherriff and Minister (Douglas Henshall) and undertaker and land speculator (Jonathan Pryce) are caught in a bind.  If they don't hand over the Danish brothers Delarue will continue killing them instead.

The movie plays out exactly as one would expect for a film in this genre.  There's cruelty and injustice, a steely damsel in distress (Eva Green), a nasty double-cross, and an epic set of climactic shoot-outs.  Mads Mikkelsen does stoic obstinate vengeance like no other and I rather liked Jeffrey Dean Morgan's charismatic bandit (side note - whatever happened to him after WATCHMEN?)  Eva Green plays the role she always plays - sultry, not to be messed with.  And even Eric Cantona doesn't offend in a minor role.  But what really sets the film apart is Kristian Levring's spare style and script and DP Jens Schlosser's stunning photography.  It just goes to show that sometimes you don't need to reinvent the wheel. You just need to do something simple really well.

THE SALVATION has a running time of 91 minutes.  THE SALVATION played Cannes and London 2014.  It opened earlier this year in Denmark, Iceland, Finland, France, Belgium, Luxembourg, Sweden, Germany and Austria.  It opens in the Netherlands on November 6th.
Posted by Bina007 at 18:00