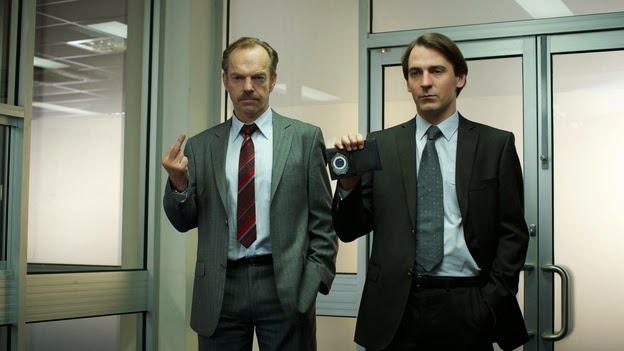 THE MULE is yet another movie programmed under the Laugh strand at the London Film Festival that could arguably be better classified as a thriller or straight drama. Which isn't to say that it doesn't contain absolutely hilarious moments and lines, but the overall tone, for me, was one of a classic cross and double-cross story of crime and corruption.

The story is set in early 80s Australia with underdog Ray (co-director Angus Sampson) persuaded by his so-called best mate into smuggling condoms filled with heroine back into Aus after a footie tour to Thailand.  The feckless Ray obviously messes this up through nerves and ends up in police detention in an airport hotel as they wait for him to shit and he attempts to hold out.  The film then descends into a three-way play off - between the cops who are clearly brutal but just how brutal? - the Aussie mobsters who want the drugs or to shut Ray up or both - and Ray himself - a man of few talents but I guess that desperate times bring out the best or worst in people.

The resulting film is very funny and very dark and disturbing. It contains genuinely good twists and had me captivated to the end. Am I going to remember it in a month's time? Maybe not.  But it's superb entertainment nonetheless.