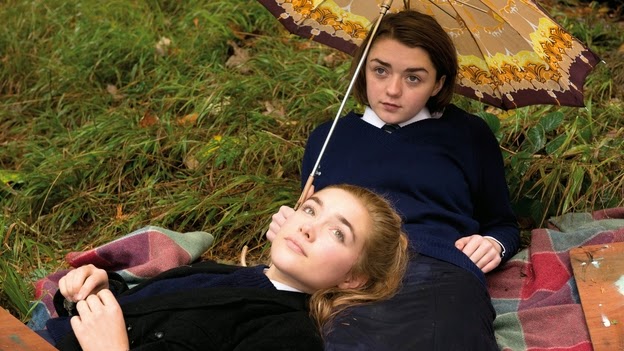 THE FALLING is a bad film. Badly conceived. Badly acted. A movie that we laugh at rather than laugh with, and that we shouldn't be laughing at or with at all.   It never recovers from the early exit of its most charismatic actress and the conceit of a Crucible-style fit of teenage hysteria is so risibly executed that it becomes absurd but in a bad way. The fiftieth time a girl fainted I said "fuck it" and was sorely tempted to walk out.

So what's the story? It's 1960s England and in a girl's school Lydia (Maisie Williams) is transfixed by her more glamorous and dangerous best friend Abbie (Florence Pugh).  This borderline erotic longing for notice manifests as jealousy as Abbie sleeps with Lydia's brother, and receives the notice of Lydia's agoraphobic mother (Maxine Peake).  Act One of the play sees us experience the raw charisma (and it has to be said superbly naturalistic performance by the actress) of Abbie and when she leaves the film never quite recovers from the whole that she creates.  Moreover, the film lurches from tense psychosexual coming-of-age drama into an attempt at a kind of creepy noir horror as schoolgirls start fainting and having seizures. Is it faked? Is it hysteria? Is there something supernatural going on, as hinted out by the white magic interests of Lydia's brother.  To be frank, after yet another absurdly staged scene of fainting fits in the school hall I really didn't care.

I suspect that what the director Carol Morley (DREAMS OF A LIFE) was trying to go for was a kind of repressed emotions transmitted through acting out culminating in an explosion and epiphany at the end.  If so, the casting is wrong.  Where Florence Pugh is natural and entrancing and Maxine Peake is subtle, traumatised and deeply moving, Maisie Williams acts in a manner that is just altogether too big. I wonder if this is a consequence of her GAME OF THRONES experience where the kind of massive scale epic fantasy requires a kind of larger-than-life performance. At any rate, the director's job is to curb any performances that unbalance the rest of the piece.

Overall, not a great film and a great disappointment after the deeply moving and important DREAMS OF A LIFE.

THE FALLING has a running time of 102 minutes. The movie does not yet have a commercial release date.
Posted by Bina007 at 16:03