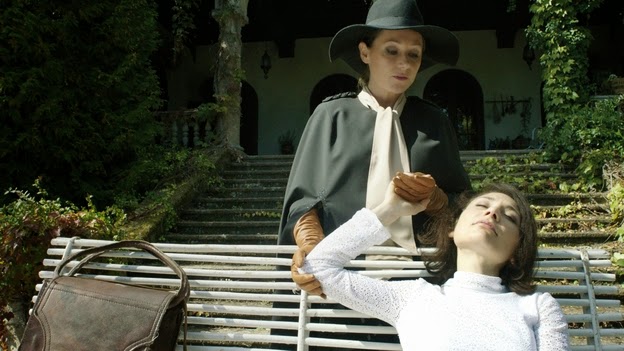 Peter Strickland is a British director’s whose movies are unmistakably his. He creates films where the aural is as important and as slippery as the visual, and where a rich knowledge of film history has been compressed and filtered into movies of rare intelligence and control. His latest - THE DUKE OF BURGUNDY - is just such a film. It tells a story that is at once bizarre and alien (at least to most viewers) but which is also utterly relatable - the story of a relationship where one loves, unhappily, and another receives that love, selfishly, or so it would at first appear. The two women involved in this relationship are Cynthia (Chiara d'Ana) and Evelyn (Sidse Babett Knudsen - BORGEN). They live in an almost oppressively antiquated and opulent country house in an unknown country in an unknown time. When we meet them they are playing out an elaborate sado-masochistic ritual - one that we will see many times over the course of the film. It seems as if Cynthia, who is giving the orders, is in control, until we see the same ritual played out again and again and see how uncomfortable she is with the fetishistic role-play, and the almost wilful ignorance in which Evelyn sits - obsessed with her own satisfaction regardless of Cynthia’s feelings.


As we reach the second half of the film, it’s clear that a moment of crisis will be reached, and as in his previous film BERBERIAN SOUND STUDIO, Peter Strickland shows us the women’s deepest fears, horrors and violent fantasies through a soundscape of claustrophobic brilliance. How many members of the audience will have nightmares of butterflies after seeing this film? I had thought that this would be the perfect point at which to end the film, but we then see a less technically astounding but more emotionally searing crescendo. The question the film poses is how far Evelyn truly loves Cynthia or whether she could be substituted by any well-dress woman with boots that need polishing. And indeed, how far could a frustrated Cynthia truly become a sadist, punishing her lover. To my mind, the movie drags on about fifteen minutes too long, giving a slightly more definitive answer to these questions than I would’ve liked. Nonetheless, THE DUKE OF BURGUNDY remains the first film of the festival that goes beyond being merely moving or accomplished to being something unique and new and genuinely provocative. It marks Peter Strickland, if we hadn’t already known it, as one of the most fascinating directors working in British cinema today.  And, let's face it, anyone who credits his perfumer is another league from every other director.