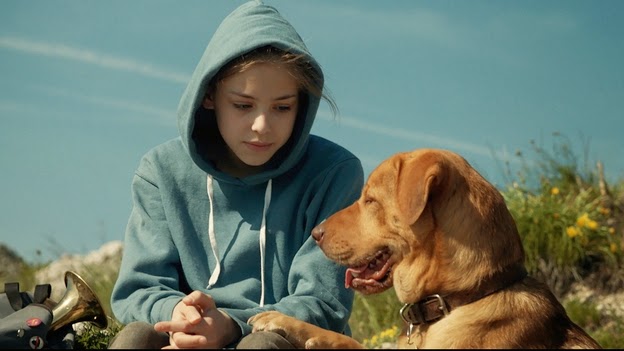 What does WHITE GOD want to be? It starts off with an almost surreal shot of many dogs chasing a young girl on a bike.  It then goes into a kind of touching coming of age story in which that girl - Lili - has to stay with her divorced father. Their relationship is forced but after a bad experience becomes closer - just as she goes through a rebellion when he kicks out her beloved dog Hagen - but improves as she comes to the conclusion that he must be lost or roadkill.  Meanwhile we get the POV of the dog.  Half the time it feels like a kind of cutesy Disney film as sweet Hagen plays with his mongrel friends and outwits the pesky dog pound men of Budapest.  But then the movie flips into a kind of social realist critique of the evils of society and underground dog fighting. I found the result well intentioned and well-acted - but a confused mess. Moreover, the in depth depiction of the dog fight is really disturbing (as it should be) but probably something people should be warned of before they go into the screening.  Overall, I'm utterly mystified as to how this won the Un Certain Regard prize at Cannes, other than the jury love their dogs?

WHITE GOD has a running time of 119 minutes.

WHITE GOD played Cannes where it won the Un Certain Regard prize, and London 2014. It opened in Hungary  in June and opens in Belgium, France and the Netherlands on December 3rd.
Posted by Bina007 at 17:22