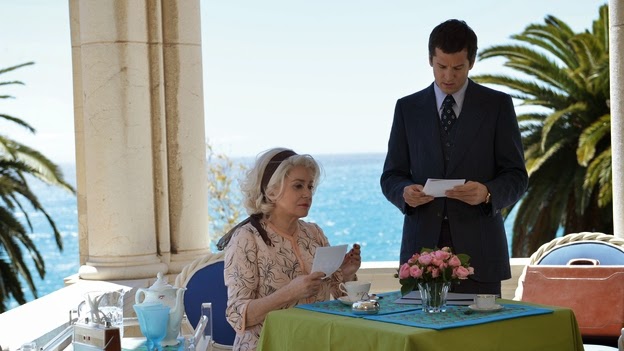 FRENCH RIVIERA is a gripping psychological drama based on the true story of Agnes Le Roux. She was a young heiress to a failing casino in 1970s Nice, seduced by an ambitious lawyer called Maurice Agnelet.  He persuaded Agnes to use her votes to oust her mother Renee as manager of the casino, handing it in effect to a rival mafia-backed casino operator called Fratoni. Then, Agnes disappeared, never to be discovered, and the money Fratoni paid her ended up in Maurice's Swiss bank account.  He escaped to Panama, only to voluntarily come back and stand the first of many trials, prosecuted by Agnes' driven but by now penurious mother.

Andre Techini's film of the affair is scrupulous in its attention to period detail and capturing the scenery of Nice, the suffocating chintzy casino interiors and the misogynistic criminal undertow of the riviera.  It's a world where people slip casually from French to Italian, from lover to lover - cruel and entrenched. Into the mix stumbles Agnes Le Roux, young but already divorced, petulant, at ease in her body, almost childlike in her stubborn passions. It's a compelling performance by Adele Haenel, and I kept wondering where I'd seen her before, and realised she was in the uniquely brave 2007 coming of age movie, WATER LILLIES.  Her Agnes falls hard for Maurice even as he tells her not to.  It's hard to understand why but maybe it was just loneliness and the need for someone other than her mother (a magisterial Catherine Deneuve).  By contrast, Maurice's motivations are clear. He is poor, frustrated, and having tried and failed to become a parasite on Agnes' mother, he switches his attentions to her in a kind of malevolent malicious glee.

The key question the film poses is whether Maurice - clearly a seducer - is also a murderer, and Techini manages to steer a clear course of ambiguity.  We see Maurice can be charming when he wants to be but we also see his cruelty - his casual dismissal of his family and the cool way in which he turns first on Renee and then on Agnes. But is this enough? Guillaume Canet (LITTLE WHITE LIES) is suitably slippery in the role.  I can't help but think that part of the reason he took the money was not for the money's sake but to be mechant toward Renee, but the wonder if the movie is that it leaves room for a number of interpretations.

FRENCH RIVIERA aka IN THE NAME OF MY DAUGHTER aka L'HOMME QU'ON AIMAIT TROP has a running time of 116 minutes. The movie played Cannes 2014 and was released earlier this year in France, Belgium and the Netherlands. It will play the Vancouver and London film festivals.
Posted by Bina007 at 12:18