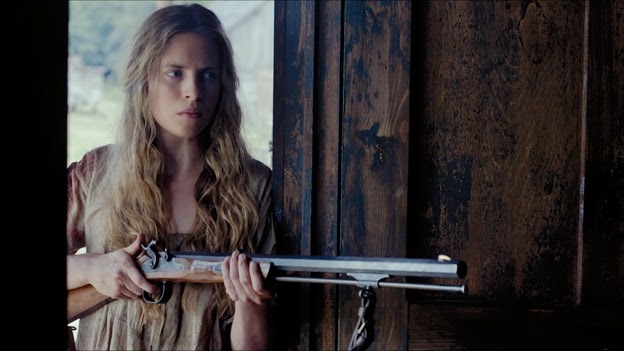 In the final months of the American civil war General Sherman undertook his March to the Sea enacting a policy of ruthless property destruction designed to bring a swift capitulation of the South.  Looting was officially forbidden but clearly occurred, and the men being away at war, it was the women who bore the brunt of the destruction.  In the new film from British director Daniel Barber (HARRY BROWN) we see what happens when three women have to deal with this threat - a minutely observed and incredibly tense study of what happens to normal people in extra-ordinary circumstances - much in the tradition of Susanne Bier.

Two of the women are sisters - the elder Augusta (Brit Marling) is realistic about their situation - starving, forced to manual labour, and living in the keeping/store room rather than the old great house.  The younger, Louisa (Hailee Steinfeld) starts the film as naive and wilful and cruel, particularly toward the Mad (Muna Otaru) - their slave.  But what we quickly see is that the need to survive has made these women equals of a sort. Mad has a wisdom born of painful experience that the other women come to admire and in a particularly potent scene early on we see that Mad knows her value.

The first half hour of the film is an exercise is almost tortuously slow ratcheting up of tension.  We see through Augusta's eyes the hollowing out of village life - death, fear and the advance scouts of the Union army. In the final hour, those scouts come to the keeping room and the movie becomes a tense cat and mouse shoot out. Intertwined with this is a kind of tentative attraction between Augusta and one of the men, who may well have the capacity to be decent, and is as much a victim of the brutalisation of war.

I can't tell you how much I fell for this movie after some misgivings about the pacing at the start. Like THE DROP, it's a slow burn but worth sticking with.  The austerity of it is breathtaking.  It's also one of the few movies where, when the final scene rolls, I really wanted a sequel to show what happened next to those characters, so much had I taken them to my heart. We rarely see strong women on screen, let alone women who have a relationship with each other - the female dramatic version of the bromance.  Accordingly, this movie is an absolutely treat. Kudos to all involved.

THE KEEPING ROOM has a running time of 95 minutes.  The movie played Toronto and London 2014 and does not yet have a commercial release date.