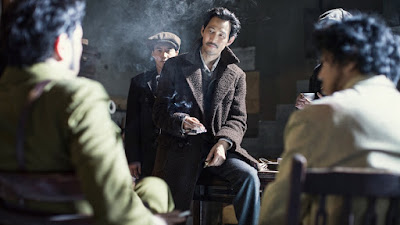 Choi Dong-Hoon's ASSASSINATION is an epic historical action drama set in 1930s Korea and featuring everything from action to romance to comedy to politics.  It combines beautifully researched and recreated sets and costumes and a fine sense of the grey areas of history with a certain heightened panache reminiscent of Tarantino. This is history turned up to eleven, and I loved it.

As the movie opens we are in 1910s Seoul under Japanese colonial rule.  A greedy capitalist bastard is sucking up the Governor-General and decides to have his wife assassinated rather than have her resistance activities compromise his rise to wealth and power.  Twenty years later and the Korean resistance leader commissions Captain Yim to gather together the A-Team, sorry, three Korean assassins to return to Seoul and kill  that treacherous businessman and his ally, an evil Japanese military commander.  They will have the perfect opportunity when the two men get together on the eve of their children's marriage of convenience. But this isn't the only assassination commissioned in the opening hour of this film.  Because treacherous Captain Yim has also commissioned the infamous "Hawaiian Pistol" to assassinate the A-team, and Captain Yim's boss has in turn commissioned two young men to kill Yim if it turns out he is a spy.

All of which sounds complicated but the remarkable confidence with which this story is told means that we always know who is after who, who has double-crossed who, and which characters are up to speed with all the shenanigans.  And believe me it gets even more complicated than all this, as we discover that a major character is actually a twin, and various assassins switch sides.

The actions scenes are bloody and rightfully upsetting even as they are fast-paced and entertaining. The two men who form the A-team with a deadly female sniper provide perfect comic-relief as does the sidekick of the brilliantly named Hawaiian Pistol.  But what's really remarkable is that the director can balance this with genuine romance and not have the comedy subvert it.  And that when major characters come into tough situations, even those we know as comic characters, we really feel their pain.  Most of all, I am in admiration of the fact that Choi Dong-Hoon has managed to make what is actually a fairly serious political film entertaining. He has a lot to say about just how brutal the Japanese colonisation of Korea was, but isn't afraid to show a Japanese character being brave and good, or indeed Korean characters being treacherous.

This is then, historical film making at its very finest - entertaining, laugh out loud funny, tugging at the heart-strings, but also provocative and nuanced. I loved every minute of it.

ASSASSINATION has a running time of 140 minutes. It was released in South Korea, the USA, the Philippines, China and Singapore earlier this year and is playing the BFI London Film Festival.
Posted by Bina007 at 16:38