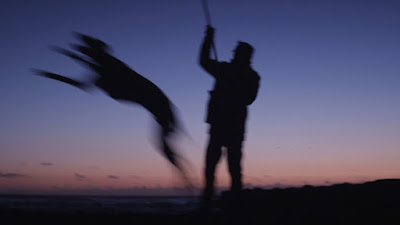 I have to say that THE CLUB is about the bleakest most depressing film I've seen in quite some time, an impression deliberately instilled by the superb Chilean director Pablo Larraín (NO!) who shot the whole thing in a grainy washed out bleak grey-blue, and forces us to watch it as if through a smeared lens.  We're stuck in a small Chilean town where the sun never shines and nothing seemingly ever happens until a priest turns up with a new inhabitant for a secret hideaway house for defrocked priests.  Soon a disturbed young man shows up and casts the most lurid of accusations against the new arrival, and when the four inhabitants, evidently well-prepared for such accusations, hand him a gun he shoots himself in the head. This in turn brings another investigating priest to the house, and sets in train the events of the film.


THE CLUB is a film about guilt and conspiracy.  The investigating priest is deeply concerned whether the men, living off the largesse of the church, are genuinely repentant, or even aware of the fact that they have committed crimes.  He is bewildered by their self-justifications and equivocations and selfishness.  But then again, while evidently a man of deep religious conviction, he is himself part of the cover-up, not wanting the church to be publicly shamed, and so looking for a spiritual rather than a judicial solution. In doing so, the movie asks us profound questions about right and wrong.  The man evidently feels pity for the victim of sexual abuse, echoing Christ as he washes and kisses his feet. But is this enough? And even more provocatively, what of the townsfolk who are so easily whipped up into mob violence?

THE CLUB is disturbing - rightly - and provocative but it's also daring visually and in its acting choices.  I have no hesitation in recommending it, but it's a tough, painful and slow paced watch.

THE CLUB has a running time of 97 minutes.  The movie played Berlin, where Pablo Larrain won the Silver Bear, Sydney, Toronto and London. It was released earlier this year in Chile and will be released in Poland on October 16th.
Posted by Bina007 at 16:08