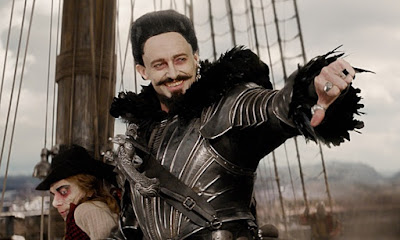 PAN is a really badly conceived and constructed film that has flashes of wit but by far not enough to compensate for the hour and a half of boredom it inflicts upon the viewer.  The director is Joe Wright, whose movies tend to be very high concept, over-worked and under-emotional for my taste.  And the writer, Jason Fuchs, seems to have way too much concept and far too little original thought. (Rather ominously he is also scripting the forthcoming WONDER WOMAN movie.)

So what's it all about? The movie is an entirely redundant Peter Pan sequel. Or rather it feels like the first half of one.  Peter is a young orphan left with some rather sadistic nuns in a gloomily lit world war two London of food rationing and German bombs. One night he is captured by a flying pirate ship captained by Hugh Jackman's camp but angsty Blackbeard and taken to the spice mines of kessel, sorry, the pixie-dust mines of Neverland. Enslaved, Peter makes friends with a character that's half Indiana Jones- half Han Solo called, wait for it, James Hook (Garrett Hedlund)!  We know Peter is going to lead a slave revolution because, hey, he can fly and his mum's called Mary! So together Hook and his sidekick Smee he nicks a ship and flies to fairyland with his new friend Tigerlily (Rooney Mara). She's a kickass girl and clearly the writers are trying for some kind of Han-Leia relationship with the rogueish Hook, complete with a last minute rescue reminiscent of A NEW HOPE. Anyways, there's then some Moria-ish stuff about fairy writing and a key and some Harry Potterish stuff about a childhood crush gone wrong and you end up just wondering why Blackbeard didn't just kill Peter when he had the chance.