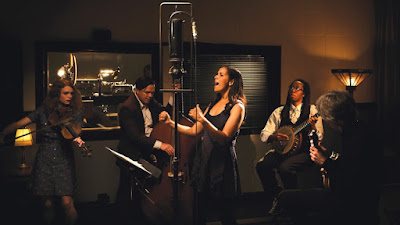 British documentary director Bernard MacMahon has created something really special in his superb AMERICAN EPIC series.  It's something almost as amazing as the studio engineer who has lovingly re-assembled and restored the only existing Western Electric lathe.  This machine is a kind of massive mechanical piece of brilliance, in which a musician plays into a microphone and the sound is amplified and cut into a record right there and then. The whole thing is operated by a pulley with a 105 pound weight on it, when the weight hits the floor the record stops.  The weight takes around three minutes to hit the ground, and that's why we have three minute pop songs.

Back in the early years of the last century, records were sold to rich people in the big cities. Then radio came and the record companies got scared. So they decided to take this amazing massive machine, created by the geniuses at AT&T, around the country to record real people playing real American music.  This was a period when if you were a great blues guitarist in Memphis you probably hadn't heard music from another part of the country, so there was a kind of purity to the genres of music that were coming out of different parts of America.  There was also a kind of purity to the technology.  Three minutes, straight to disc, no post-production, no re-takes. You position the people around the mike, rather than the other way round. That can be enlivening for some musicians, and scary to others.


This is the experience that Jack White and T Bone Burnett create in this amazing two and a half hour musical indulgence. We hear great musicians from all genres - rap, country, blues, rock-n-roll, gospel - recording fantastic tracks on this uncompromising and beautiful piece of equipment.  We see Elton John compose a song on film, and that's not even the best thing about it.  We see Beck struggle to record with a gospel choir, trying to level out the sound without the aid of separate tracks, and coming up with a beautiful solution. We hear a Latin American melodramatic ballad from Ana Gabriel that make you want to cry and outrageously rocking number from Alabama Shakes that makes you want to dance. We hear Nas and Taj Mahal talk about the lyrics from the 1920s that are still relevant today.  We hear a track recorded without even an electric amplifier - purely mechanical and acoustic - that's breathtaking in its simple communication of music.  And if all that isn't enough, we finally get a duet between Merle Haggard and Willie Nelson that's just a privilege to listen to.

If you're any kind of music fan, this film is not to be missed, and not to be watched and heard on anything less than a big screen with great audio. I can't wait to dive into the rest of the documentary series that explores more of the history of the Western Electric Lathe, and for which these Sessions form the final part. Kudos to all involved.

THE AMERICAN EPIC SESSIONS aka AMERICAN EPIC has a running time of 140 minutes. It will be shown on US TV in October.
Posted by Bina007 at 15:47