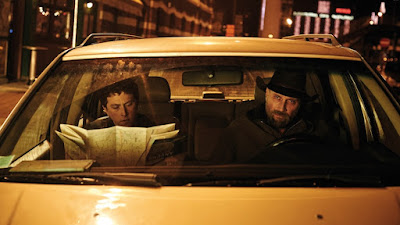 LES COWBOYS is a strange dark drama, quite unlike anything the rather whimsical title had let me to expect, but entirely in keeping with the superb dramas written by first-time feature director Thomas Bidegain. In movies like RUST AND BONE and THE PROPHET, directed by Jacques Audiard, Bidegain had helped to create worlds that documented a gritty reality of contemporary France. He also seemed to focus on characters at just the key moments of life-changing reversal. They come to us with no history, and we observe them tackling great obstacles.

In this case we are in provincial France in the mid 1990s. A family is attending some kind of American country music festival, complete with father (Francois Damiens) in cowboy hat singing the Tennessee Waltz. But at that very event, their teenage daughter Kelly disappears, and it is soon revealed that she has a muslim boyfriend, is studying Arabic and was potentially being swayed by Islamist propaganda. Spurned by the police and viewed with suspicion by the Ministry of the Interior, the father takes it upon himself to follow every lead to try and find Kelly. This takes many years, and takes him to many countries so that eventually he too learns to speak Arabic. And eventually, their son, Kid (Finnegan Oldfield) becomes embroiled in the quest, travelling as far as Pakistan after 9/11 and coming across John C Reilly’s mercenary.


This is a drama about cultural suspicion and misunderstanding as well as obsession and the price paid. When Kelly first goes missing her father assumes she has been abducted, views the Muslims as dangerous and corrupting, and spurns any overtures of friendship or help. But this is at odds with information that we can glean. It is clear to us that Kelly has made an active choice to take on a religion and a lifestyle and it’s not clear at all that she has become an extremist. And there’s a certain irony that as the years pass, the man who was so initially dismissive of the Muslim culture should be able to speak Arabic.

The reaction of Kid to his sister’s disappearance is more complex. He’s as driven as his father, if not more so, and yet seems to have a more nuanced reaction to the muslim culture he’s trying to traverse. Nonetheless, even when we feel he’s at his most accepting, whenever there’s a major terroristic attack he feels he has to go there, as if the only way in which his sister can live as a muslim is to be an extremist. It’s hard to know what he wants from a reunion, and many characters tell him that through the movie. Do either father or son want to see a strong woman?

Thomas Bideguin’s story is compelling and rare in modern cinema. I suspect too much is being made of comparisons to THE SEARCHERS. Really this is a contemporary story about cultural divide, with a quite different pace and feel. How does he fare as director? He favours a slow pace, a controlled frame and the slow push back on scenes of great significance. There are some stunning visual shots of Pakistani mountain landscapes but it’s fair to say that this film does not pack the visual punch of an Audiard film.

COWBOYS aka LES COWBOYS has a running time of 114 minutes. The movie played Cannes and Toronto 2015 and will be released in France on November 25th.
Posted by Bina007 at 16:54