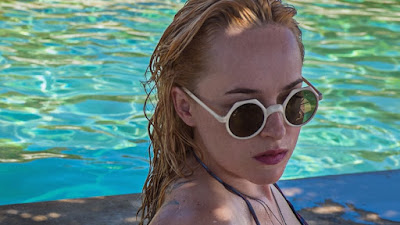 Director Luca Guadagnino (I AM LOVE) makes a triumphant return to our screens with his remake of Jacques Deray and Jean-Claude Carrière’s LA PISCINE.  One of my all-time favourite films is thus transformed into another superb erotically charged, wonderfully ambiguous thriller.

In this largely faithful remake, we are placed on a small Italian island and a rented villa where rockstar Marianne (Tilda Swinton) is recovering from a throat op that renders her almost unable to speak. She's evidently passionately and mutually in love with her boyfriend, a recovering addict photographer called Paul (Matthias Schoenaerts.) Their gloriously restful idyll is shattered when Marianne's ex Harry (Ralph Fiennes) turns up with his young daughter Penelope (Dakota Johnson) in tow.


Harry is one of those characters that's large and crude and greedy - for booze, drugs, sex and love. He's obnoxious and loveable at the same time - the self-proclaimed life of the party who's almost oblivious to the fact that other's might not be having as great a time as he is. It's a big, loud, infectious, unembarrassed performance from Ralph Fiennes that's as memorable as his overlooked classic turn in GRAND BUDAPEST HOTEL.  Harry wears his heart on his sleeve, and clearly resents Marianne's newfound almost bourgeois happiness with Paul. By contrast his daughter is a far more slippery, ambiguous character. Is she a wily seductress or a sensitive shy teen? And what really is the nature of her relationship to Harry, or indeed Paul?  Why does she resent Marianne? Is she jealous? And how serious is Harry as a threat to Paul and Marianne?

All of this passion and jealousy simmers and bubbles up to the surface in a brilliantly rendered series of set pieces that beautifully employ cinematography, bravura performance and music.  The thriller reaches its climax and then goes on as we slip into an almost Highsmithian grey area of sympathy, shock and wry amusement.

Is this the only time a remake has been as good as the original, all the while being unmistakably its own thing?

A BIGGER SPLASH has a running time of 108 minutes and played Venice and London 2015. It opens in Italy on November 26th, the UK on February 12th, Germany on March 31st and in the USA on May 13th.