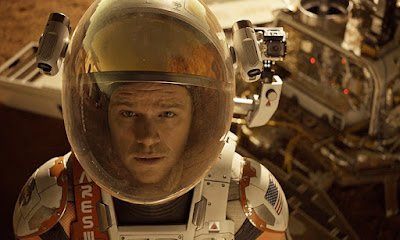 Alfonso Cuaron's GRAVITY starts in media res, with a small space mission going drastically wrong leaving the sole survivor to find the technical skill to make it safely home. Most importantly, she has to overcome her psychological barriers to survival in a movie that asks profound questions about forgiveness and rebirth.  By contrast, Ridley Scott's THE MARTIAN, though starting from the same premise, is a far sunnier affair, in which everyone is basically good smart people trying their hardest to get Matt Damon's astronaut home. This isn't a criticism so much as a statement about the disposition of this film. It's a clever, cheerful dramedy that relies, much like Robert Downey Junior's IRON MAN, on the essential likability of its protagonist, and jauntily-scored science-problem montage sequences to get us through the two and a half hour run-time.  There's no existential angst here, and the movie's only real flaw, no real tension as to whether the gonzo engineered rescue mission is really going to work.

And so, in the words of jovial stranded astronaut Mark Watney, we get two hours of him "sciencing the shit" out of every problem he faces - from making food and water on a barren planet, to communicating with NASA, to travelling to the site where his rescue will take place.  The science-y detail is impressive and engrossing and speaks to the research done by novelist Andrew Weir.  Damon is just fine delivering his lines but basically his performance rests in being amiable. The supporting cast is vast and high quality and appropriately racially diverse. Ultimately I get the feeling that this is a really fun, uplifting movie that will prove quite disposable, except to those kids it inspires to study engineering and maths (which is a great thing in itself). There's no grit, no heft, but it's a pleasant way to pass a few hours.