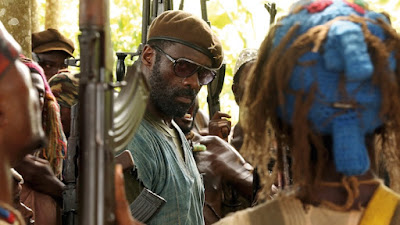 A podcast review of this film can be found here, or you can subscribe to Bina007 Movie Reviews in iTunes.

BEASTS OF NO NATION is a beautifully photographed searing drama set in a fictional African country beset by civil war. The protagonist is a young boy called Agu (unknown Abraham Attah) whose village is caught up in a violent civil war. Separated from his mother, he watches his father and brother gunned down by government troops and flees into the bush, only to be picked up by Idris Elba’s warlord “Commandant”. Agu is groomed, drugged, indoctrinated and sexually abused abut never becomes a hardened soldier. We know this because BEASTS OF NO NATION is one of the rare movies where a voice-over is needed and desperately sympathetic. Raised in a deeply Christian family, Agu questions every act of violence, and wonders whether God sees and judges. He lifts up and carries his friend and fellow child soldier Striker when he’s shot down. And with a clarity that belies his years, he realises that the even if the war were to end, he will not be able to become a child again. Indeed, he even pities the adults who try to get through to him. They think he is too shell-shocked to speak but really he wants to protect them and himself from the brutal memories.

This film has been gathering praise on the festival circuit and having seen it I am unsurprised. Idris Elba is utterly charismatic as the warlord. There’s a scene about half the way through the film where he whips his troops into a battle-frenzy that approaches the spiritual that is quite haunting. But we also see him used and abused by the rebel faction - as much a prisoner of his past as young Agu. But this film really belongs to Abraham Atta, who goes from portraying a care-free prankster to an bruised and psychologically traumatised child soldier. His intrinsic talent is quite stunning, and certainly Oscar worthy. Behind the lens, Cary Fukunaga shows the visual brilliance we have come to expect of him. The vivid colours and landscapes of Africa are beautifully captured, and his use of saturated colour to depict drug induced hallucinations is both beautiful and unforgettable.

Which brings me to one of the major talking points of the film - the fact that it is the first major Netflix produced motion picture. As such, it will be given a very short and limited release in UK cinemas before being released on demand. While I am utterly thrilled that Netflix is stretching out to fund high quality challenging drama of this kind, it does sadden me that a film this visually impressive will be seen by most people on a TV screen at best and an iPad or Laptop size screen at worst. I strongly urge you, therefore, if you can, to see it while it’s in the cinema.

BEASTS OF NO NATION has a running time of 133 minutes and is rated 15 by the BBFC.  The film played Venice, Toronto and London and will be released on Netflix in the USA on October 16th.
Posted by Bina007 at 21:19