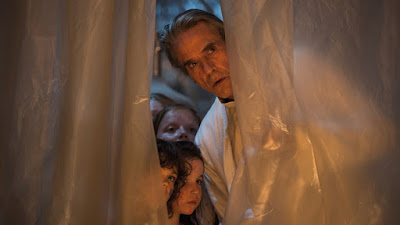 Yeah so, I love J G Ballard and High Rise is one of my favourite novels, and I really love Ben Wheatley's gonzo horror craziness, having done retrospective podcasts on his earlier films.  Tom Hiddleston is obviously not just a great actor but a nice guy.  So I was super excited about this new film.  The problem may have been high expectations. The problem may be that High Rise is a high concept novel and these can sometimes come across as flat on screen. But whatever the reason, HIGH-RISE was utterly underwhelming.

The movie, and indeed the novel on which it is pretty faithfully based, are set in 1970s England - another time of deep social inequality and financial disruption.  The high concept is that an architect has built a high-rise apartment block complete with all amenities - swimming pool, school, gym, supermarket - so that one need never leave.  And in classic English fashion, the social hierarchy is perfectly preserved inside - lower orders in floors 1 to 10, middle classes to floor 35 and upper classes above, with the architect as God in the penthouse.

The social conflict is present from the start. The upper classes resent the lower classes using the pool, and think they block up the garbage chutes while the lower classes resent the high speed lifts. The obsequious middle classes just hang about hoping for a condescending upper class dweller to invite them to a a cocktail party. But all hell really breaks loose when power outages begin, and in the darkness all the primeval urges come to the fore.  Women are molested, drunken orgies take place, dogs are drowned and supermarkets looted.  The weird thing is, however, that none of this goes reported to the police and none of the residents leave. In fact, they rather seem to enjoy the bestial free rein.

Maybe the problem is that there isn't really a proper plot in the sense that a protagonist does something and consequences follow and characters develop.  Basically in the book as in the film, a bunch of people get drunk and go all out violent on each other.  The acerbic wit of the novel doesn't seem to have translated well onto screen, and even the genius opening line, while translating into a nice scene of Tom Hiddleston doing something unspeakable to a dog, somehow lost its bite.

I can sort of see how on a production and costume design level the film works.  And none of the acting is bad.  The movie just didn't ignite for me.  And I wonder if Ben Wheatley missed a trick by not transposing the action to the present day and trying to make a more explicit and urgent point about current income inequality and social stratification - maybe even making something more of the link between poverty and racial discrimination.

Because as it is, this movie just feels like a rather odd, rather dull homage to 70s bad taste.

HIGH RISE has a running time of 112 minutes.  The movie played Toronto and London and will be released in Germany on September 1st 2016.
Posted by Bina007 at 16:40