KNOCK DOWN THE HOUSE 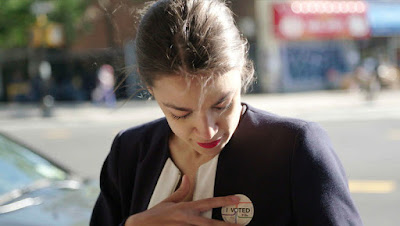 Rachel Lear's and Robin Blotnick (THE HAND THAT FEEDS) re-unite for another socially conscious documentary, following a crop of young radical liberal candidates for US public office, including the now incredibly famous Alexandria Ocasio-Cortez. The film won the audience award at Sundance 2019, timing its release fortuitously for the upswing of optimism around a new crop of diverse progressive entrants to Congress, lining itself up for a May 1st Netflix release.

The film itself is a tightly edited, dynamic and compelling tale of how to start a fight-back after the shock 2016 presidential election result.  We follow a handful of hopefuls trying to challenge good ole boy incumbents who seem shocked that anyone would have the temerity to challenge them.  While I - like many others I'm sure - came to the film to find out more about "AOC" - a woman who seems to have shifted Democratic environmental policy with a tweet - I stayed for a genuinely moving tale about what it takes to campaign at grassroots level. One forgets how - even in this social media age - people still have to go knocking door to door, listening to their voters, husting and canvassing. It's somehow reassuring to know that the basic mechanics of politics are still what they were in the eighteenth century.  Of course, I knew AOC won, and that was still uplifting. But I hadn't heard of the other candidates and was genuinely surprised at how on-edge I was as the results began to come in.

So this doc works perfectly on two levels - first as pure thrilling entertainment - but hopefully also inspiring people of whatever political views to get engaged, pick up that clipboard, listen to people and get into politics.

KNOCK DOWN THE HOUSE is rated PG and has a running time of 86 minutes. It is available on Netflix.
Posted by Bina007 at 13:06