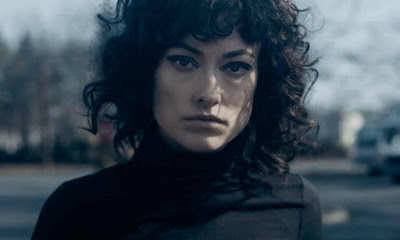 While BOOKSMART is getting all the hype, Olivia Wilde stars in a taut beautiful revenge thriller that's quietly slipped onto our screens.  A VIGILANTE is the debut feature from writer-director Sarah Daggar-Nickson, and is pretty much carried by Wilde who plays Sadie, a domestic abuse victim turned violent vigilante.

In the present day, scenes alternate between Sadie quietly, meticulously, threatening abusers with violence to get them to leave their victims alone - and Sadie working on herself - whether training in spartan hotel rooms, or attending victim support groups. Both scenes have their own weight.  There's an impressive authenticity and realism in how Sadie prepares for her missions, training herself in make-up and disguise on youtube videos.  The score is particularly effective in giving her missions a workmanlike, unglamorous, but deadly serious vibe.  And then in the quiet more reflective moments, whether alone or in group therapy, the film has a quiet, simple power of authentic suffering.  Daggar-Nickson avoids anything showy - she just lets her camera focus on these women as they tell their awful stories in a straightforward, heart-breaking way.

A VIGILANTE is then - a superb debut - and even moreso because it manages to get the balance just right. It doesn't shy away from showing violence, and its impact, but never feels gratuitous or exploitative. And while it purports to show that vengeance is a solution, it also has Sadie tell the women that they need to find a new support group when they leave - the violence gives them a chance, but it isn't actually a long-term sustainable solution.

A VIGILANTE is rated R and has a running time of 91 minutes. It played SXSW last year and was released in the USA earlier this year. It is currently on release in the UK, including being available to rent on Sky.
Posted by Bina007 at 15:26