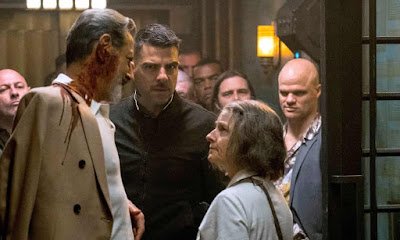 In which Jodie Foster plays an old lady with a thick Noo Yawk accent who runs a secret hospital for the criminal underworld. In heavy make-up, with a shuffling gait, trying to keep the peace among warring thugs, she impresses with a truly immersive performance - her toughness matched by genuine melancholy at the death of her son.  The delicate equilibrium in which she lives is disturbed when Zachary Quinto (STAR TREK) brings in his mortally wounded father, Jeff Goldblum, violating the Nurse's strict code and dredging up painful events from her past. It also unleashes nastiness among her guests, including Sofia Boutela and THIS IS US' Sterling K Brown.

HOTEL ARTEMIS is the first directorial feature from Drew Pierce - the guy who wrote IRON MAN 3 - and as one would expect from that it's witty and high concept. The production design of the antiquated hotel is really beautiful and the cinematography from Chung-Hoon Chung gives it a suitably ominous claustrophobic feel.  I love the near future setting and delicate hints at sci-fi, but this film is best viewed as a nasty little drama of claustrophobic conflict, with the real suspense around who'll be the last man or woman standing.   It's a clever, captivating film - to be sure by the end I didn't really care who was left alive - but I really want to see what Drew Pierce does next.

HOTEL ARTEMIS is rated R and has a running time of 94 minutes. The movie is available to rent and own.
Posted by Bina007 at 08:28