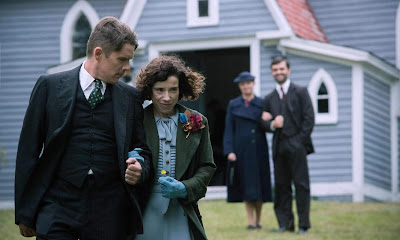 MAUDIE is a biopic of an apparently famous folk artist made by director Aisling White and written by Sherry White. It stars Sally Hawkins as a woman who is severely arthritic and infantilised by her family, escaping to menial labour for a fisherman (Ethan Hawke) who abuses her.  She self-medicates with chain-smoking and painting, has the luck to be talent-spotted by a rich socialite and achieves a measure of fame and financial independence.  This shift in power naturally impacts the dynamic with her now husband, who becomes almost sheepish in the latter half of the film, and genuinely tries to help Maudie achieve some kind of emotional closure as her health deteriorates.

The movie is well enough made and well acted and I know one should never criticise the choice of a film's subject but how well that subject was treated. All I know is that it may be possible to make a super interesting film about Maud Lewis but this wasn't it. I found myself at a distance from the characters, admiring their acting, without ever really feeling their emotions or actually caring about what happened to them.  The whole thing just fell earnest and Oscar-baity and frankly dull.