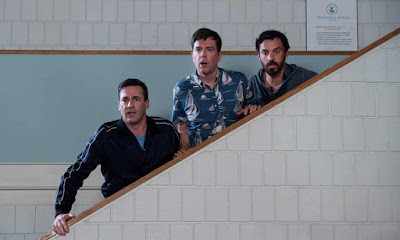 TAG is a superb film - great slapstick and verbal wit - wonderful spoofs of action movies - and a really genuinely warm heart.  It's based on a Wall Street Journal article about a bunch of grown men who have been playing a game of tag together since they were kids. Now grown-ups, every May is hunting season, and while all of them have been tagged one time or another, Jeff (Jeremy Renner) hasn't. So they band together to try and take him out at his wedding, although they aren't complete dickheads, so they don't actually want to ruin his wedding doing it. It's absolutely glorious seeing Ed Helms, Jake Johnson and Jon Hamm take in pratfalls and stunts - they look like they're having the time of their life.  And Jeremy Renner is hilarious spoofing the super-serious inner monologue of an action hero trying to avoid being tagged. The visual humour has flair and the film just works! But what I really loved was the attempt to seriously interrogate where the line is between a fun game and obsessive competition, and what the value of friendship really is.  The ending of this film gives us a clear view on this, and it's deeply moving while never feeling cheap or manipulative.  I also love how the script - which could've just been another HANGOVER style bro comedy - managed to beef up the roles of the women - making them actual protagonists and deeply enmeshed in all of the moral questioning that occurs. Kudos to all involved!