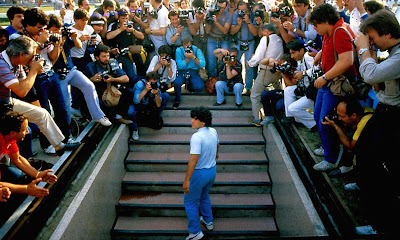 DIEGO MARADONA is the latest doc from Asif Kapadia - the film-maker behind the superb SENNA and AMY.  Once again he uses the same technique - curating a collage of previously unseen video and audio to give an overarching narrative about an icon's inner life.  He doesn't insert himself overtly into the doc in the way that Nick Broomfield or Michael Moore do - but his thesis is very present, conveyed through his editing and shaping of the material. In those prior docs, Kapadia created a villain - Alain Prost and Amy Winehouse's dad. In this one, he creates both hero and villain in Diego and Maradona - the charismatic super-talented slum kid who made good - and the cocky, cocaine-fuelled adulterer who imploded.  It's an effective duality but leaves other factors unexplored. Because Maradona's life - unlike Senna or Amy - allows us a window into two particular social issues which are as fascinating as he is. The first is the racism and classism of Italian society that allows northern football fans to call the Napoli fans black cholera-plagued scum. The second is the influence of the mafia on Napolese life.  These intersect in Maradona, because he was bought for a record sum by Napoli - the poorest club in the poorest town in Italy - bankrolled by the mafia who then courted Diego and gave him cocaine and women. They also intersect because Diego sympathised with Napoli and for a time embodied all its best hopes because he too had been called all the names, treated as scum, and could become their avatar.  I wanted to hear more about these issues and felt that Kapadia was either reluctant or unable to explore them further. And I feel that this is because he was over-concerned with using his treasure trove of unseen Napoli football footage, and remains resistant to using talking heads to provide social context.  The problem with this approach is that for all but the most ardent soccer fan, watching footage of 1980s seria A football isn't that interesting.  And second, that I left the doc wanting more - unsatisfied despite sitting through a 2 hour doc.  That said, it's still a film worth watching for the occasional flashes of Diego's charisma, and the joy of seeing him teach his daughter how to swear at the Juve fans.

DIEGO MARADONA has a running time of 130 minutes. It played Cannes and Sheffield 2019. It is currently on release in the UK and opens in the USA on September 20th.
Posted by Bina007 at 09:34