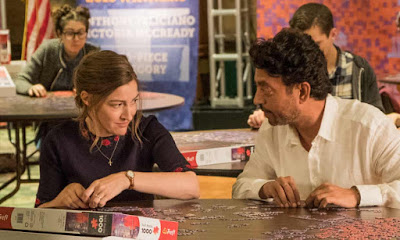 PUZZLE is worse than banal, it teeters on the offensive.  The banality begins with the slow-moving uninteresting tale of a middle-age housewife who lives as a martyr tending to her family.  In her spare time she does jigsaw puzzles and soon teams up with a glamorous exotic Indian millionaire to train for a competition.  Naturally - predictably - they end up falling for each other, and the affair gives her the confidence to demand a more equitable share of labour around the house and for her sons to take control of their lives. But in the end she drops out of the competition and her affair and returns to her now reformed family. And what of the Indian puzzler who enables this renaissance? He's cast off casually having done his part. The whole thing struck me as very dodgy and unconvincing. I get why she would be fascinated by him but not what he would see in her. Every now and then the script those in a line where he says she's beautiful, but they never have a conversation that shows a spark, and the two actors - Kelly Macdonald and Irrfhan Khan - have no chemistry. The resulting film is just too dull, and then dodgy, for words. It's the racial equivalent of films that creative manic pixie dream girls whose only purpose is to prompt a character reversal in a man, or that create wise old black women whose only purpose is to enlighten the young white protagonist. Enough already.