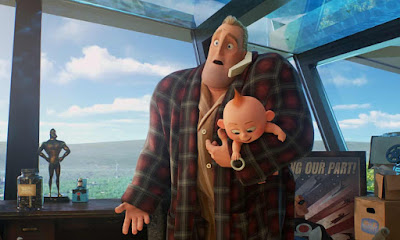 The Incredible family is back, but out of work when the world turns against superheroes.  But have no fear! Superrich siblings appear offering Mrs I a job as a private sector superhero complete with PR rehabilitation plan.  When did anything in this world ever go wrong with American superrich siblings involved? So dad stays at home with kids - cue lots of jokes about how tough childcare is - especially when baby Jack Jack has superpowers too. And mum goes off to fight a newly emerged super villain called Screenslaver. No guesses as to who that turns out to be in real life.

The resulting film is visually witty and of course the domestic duty role reversal throws up a lot of good gags. But I couldn't help but feel that this sequel lacked a little elan and all felt a bit predictable and blah.  The animation is of course superb and the design wonderful but animated films have moved on since the original and this film just hasn't.  In a world where the cutting edge of animated design and wit is defined by SPIDERMAN: INTO THE SPIDERVERSE - this film seems rather old-fashioned - stuck in time 14 years ago when it was pioneering. Does this sort of middle-age middle-class humour about old-fashioned men struggled to take care of a kid really feel relevant anymore?