LIAM GALLAGHER: AS IT WAS 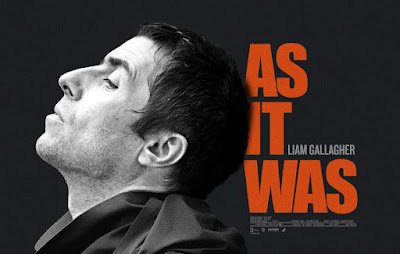 LIAM GALLAGHER: AS IT WAS is a rather earnest and ultimately rather charming documentary about the former front-man of one of the 1990 supergroups, Oasis.  It picks up as the group splits, thanks to increasingly violent and still on-going fighting between Liam and his brother Noel, and the documentary never really recovers from the absence of Noel's point of view, and Oasis' tracks.  We then move to the start and collapse of Liam's follow-up band Beady Eye and onto his eventual solo career. It's kind of touching to see how much Liam just sees himself as a rock-band front-man - he never considers anything else or just giving up. He's genuinely shocked and winded when his brother pulls the plug on Oasis. And there's even something admirable in the fact that he managed to pull himself out of addiction and recommit to music, thanks to the love of a good woman -his now wife/manager.  The sincerity of his desire to just play music for his fans is touching and there's something credible about him that bands like Coldplay will just never have.  He's still just rocking up to concerts in a parka with some loud guitars and his snarling singing style trying to give kids a good time. Good on him - genuinely. How many super famous rock musicians have anything like this kind of self-awareness and happy ending?  I had found the first half a bit dull but was ultimately won over by Liam's charm! Just seeing him rail against PG Tips while on a tour bus with his kids is funny and lovely.  Would that all rockstars managed to achieved this kind of balance.

LIAM GALLAGHER: AS IT WAS has a running time of 85 minutes and is currently on release in the UK on screens and streaming services.
Posted by Bina007 at 06:36